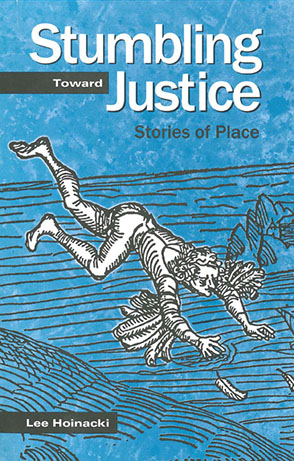 Stumbling Toward Justice is a collection of stories of one man's odyssey through the darkness of the modern world. His journey takes him through the United States, Venezuela, Mexico, Spain, Germany, and India. In each place he stumbles for ground on which he can stand, on which he can seek an honorable life and practice.

Lee Hoinacki's goal, he tells us, is to illustrate a fundamental insight: "The promise of progress is a lie, a terrible and cruel trap. My words can have only one justification: they sow doubt." He questions contemporary belief in the goods offered by mainstream or conventional practices of child rearing, education, health care, industrial farming, and offers a critique of economic growth and technological advances. Each chapter relates a story in one of these areas from Hoinacki's experience, an experience that inspires him to critical reflection.

Hoinacki's underlying assumption is that a narrative relating one's personal experience may introduce the reader to a wider and more incisive understanding than that provided by the investigative and reporting methods of the social and natural sciences. He suggests that one comes to see the physical world, the self, and others better through the language of poetry than through that of science. Stumbling Toward Justice is a fitting sequel to his earlier book, El Camino: Walking to Santiago de Compostela. In this account, Hoinacki is writing not about a single pilgrimage but about a series of journeys over the course of his life. He speaks with the greatest possible directness and authenticity, and the truths he draws are powerful because his right to speak them has been earned along the way. "I must discover and improvise my own story as I go along," he writes.

Lee Hoinacki is a former Dominican priest, political scientist, and subsistence farmer. He is the author of El Camino: Walking to Santiago de Compostela (Penn State, 1996).