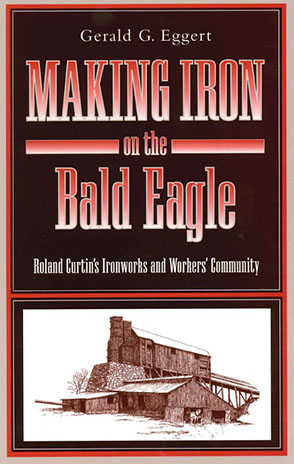 In 1810, Irish immigrant Roland Curtin launched a charcoal ironmaking operation in central Pennsylvania that continued for 110 years. Through this engaging account of Curtin and his iron plantation, Gerald Eggert provides an important chapter in the history of the iron industry in America. Eggert's story begins with Curtin’s arrival in the Bald Eagle Valley in 1797. From the time he constructed his first forge on the south bank of Bald Eagle Creek until the final closing of the Eagle Ironworks in 1922, Roland and his sons, then his grandsons, and still later a great-grandson operated what had become one of Centre County's major enterprises. Throughout much of its history, the Eagle Works employed between 100 and 200 full- and part-time workmen.

Eggert analyzes the workforce and describes life in the workers' village. The relationships, lifestyles, and housing of the Curtins, in contrast to those of their employees, offer insights into the social history of the period. Eggert also provides an excellent summary of the ironmaking process—from the cutting of wood and making of charcoal to the mining of ore and smelting of the iron—and the challenges of transporting iron products out of the frontier to Pittsburgh and Philadelphia.

The long history of the Curtin family's Eagle Ironworks mirrors both the rise and the long decline of American charcoal-iron production. Typical of the small, family-owned enterprises that bridged the gap between preindustrial and modern industrial production, the history of the Eagle Ironworks illustrates both the industrializing and, later, the deindustrializing processes and the impact these had on all who were involved. When the Eagle Ironworks closed in 1922, it was the last charcoal-iron establishment in Pennsylvania and one of the two or three last such works in the United States.

“Eggert relates a classic tale of proprietary achievement, local prominence, and ultimate stagnation within a family firm. . . .
“Eggert ably shows that examining life and labor far from the big cities and their relentless innovations enriches our understanding of the history most Americans experienced and made. We are once again in his debt.”—Philip Scranton, Labor History

“Most histories of early American iron making have been studies of the industry rather than of individual firms, owing perhaps to the generally valid assumption that there is more to learn from the rule than from the exceptions to it. A study of one firm can all too readily become an exercise in antiquarianism, unless its author is able to place the firm in its larger industrial and social context. Fortunately for readers of Making Iron on the Bald Eagle, its author, Gerald G. Eggert, has done just that.”—Paul F. Paskoff, Business History Review

“Eggert's book offers readers of Isis an example of an industry that throve without benefit of natural science in a rural setting for nearly a hundred years. Eggert presents a compelling description of life on an iron plantation and of the vicissitudes of running a family enterprise. The survival of Curtin Village and its furnace as a heritage site in Pennsylvania adds interest to his story.”—Robert B. Gordon, Isis

“Professor Eggert has made another solid contribution to the history of the iron industry in nineteenth-century Pennsylvania. This chronicle of iron barons and industrial workers in Curtin Village adds a central Pennsylvania accent to already existing narratives of iron barons in Hopewell Village, the efforts of Rebecca Lukens in Coatesville, or those of David and Samuel Reeves in Phoenixville. . . . This study raises some very serious questions concerning Roland Curtin's business priorities. It also serves to remind readers of the subjective nature of credit and finance.”—Thomas R. Winpenny, Pennsylvania Magazine of History and Biography

Gerald G. Eggert is Professor Emeritus of History at Penn State University. His publications include Harrisburg Industrializes: The Coming of Factories to an American Community (Penn State, 1992) and the pamphlet "The Iron Industry in Pennsylvania," published by the Pennsylvania Historical Association.