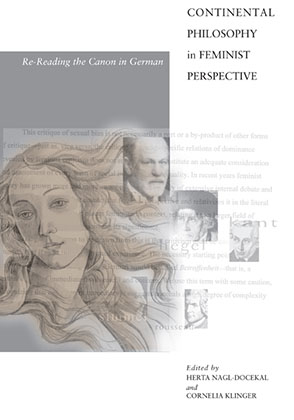 "We translate what American women write, they never translate our texts," wrote Helene Cixous almost two decades ago. Her complaint about the unavailability of French feminist writing in English has long since been rectified, but the situation for feminist writing by German-speaking philosophers remains today what it was then. This pioneering collection takes a giant step forward to overcoming this handicap, revealing the full richness and variety of feminist critique ongoing in this linguistic community. The essays offer fresh readings of thinkers from the Enlightenment to the present, including those often discussed by feminists everywhere—such as Freud, Habermas, Hegel, Kant, and Rousseau—as well as some less subjected to feminist critique such as Benjamin and Weininger.

In their Introduction the editors provide the context for understanding both how these essays fit into the larger picture of developing feminist theory and what makes their contribution in some ways distinctive.

Cornelia Klinger is a Permanent Fellow of the Institute for Human Sciences in Vienna.

Herta Nagl-Dockal is Professor of Philosophy at the University of Vienna.

Toward a Feminist History of Utilitarian Philosophy