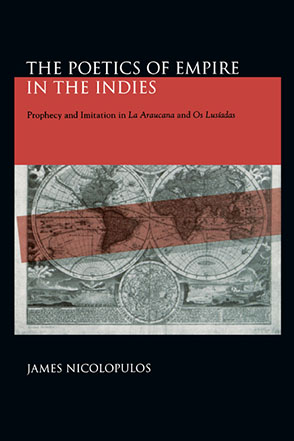 “An admirable piece of scholarship. Nicolopulos’s history of these poems’ imperialist projects—from their inception to recent critical interpretations—is one fully as engrossing as the poems themselves.”—Anne J. Cruz, University of California, Irvine

In The Poetics of Empire in the Indies, James Nicolopulos investigates literary representations of sixteenth-century Iberian colonialism and imperialism by analyzing Alonso de Ercilla’s "La Araucana," a narrative poem that recounts the initial phases of the Spanish conquest of Chile in the mid-sixteenth century, and Luis de Camoens’s "Os Lusíadas," the epic celebration of early Portuguese maritime expansion in the Indian Ocean and beyond.

Delving into the epic traditions of the Classical, Medieval, and Renaissance periods, Nicolopulos outlines practices of imitation within the two poems, focusing specifically on the employment of epic models in "La Araucana." Having made powerful connections to Ercilla’s literary and critical predecessors, Nicolopulos demonstrates that the contemporaneous publication of "Os Lusíadas" further affected the content and presentation of "La Araucana." In so doing, he elucidates the rivalries—poetic, political, commercial—between Spain and Portugal during this age of expansion.

An investigation into imitation and representation in colonial texts, The Poetics of Empire in the Indies offers new connections between two early literary representations of Iberian imperialism.

“An admirable piece of scholarship. Nicolopulos’s history of these poems’ imperialist projects—from their inception to recent critical interpretations—is one fully as engrossing as the poems themselves.”—Anne J. Cruz, University of California, Irvine

“This book is a meticulous and erudite study of Alonso de Ercilla’s strategic use of the prestige of Classical and Renaissance texts in the epic poem “La Araucana” to construct a poetics that inscribes the poet’s own ventures in colonial Chile within a world-encompassing imperial design commensurate with the imperial pretensions of his king, Philip II.”—Luis Fernando Restrepo, Sixteenth Century Journal

“From all points of analysis, The Poetics of Empire constitutes a commendable work of serious scholarship that skillfully vehicles a new appreciation of Renaissance practices of imitation.”—Kathryn Bishop-Sanchez, South Atlantic Review

“It is an important, thorough, Borgesquely instructive mapping of Iberian mantic imperialism in the 1570s, worth close reading itself.”—Fabio Lopez-Lazaro, South Central Review

“Yet for its acuity and rigor of reading, for its thorough accounting of the contours and coordinates of the epic traditions and conventions, for its sustained attention to the details and differentia specifica of the two texts compared, for its demystification of the discursive logic of imperialism, and for its contestation and reformulation of a theory of imitatio, The Poetics of Empire in the Indies can justly be reckoned as an impressive and consequential intervention in the areas of comparative literature, Renaissance studies, and colonial discourse analysis all at once.”—Azfar Hussain, Rocky Mountain Review

James Nicolopulos is Assistant Professor of Spanish at the University of Texas at Austin. He collaborated with Chris Strachwitz on Lydia Mendoza: A Family Autobiography (1993) and has published his work in the journal Lucero and in Aspects on Medieval and Renaissance Translation in the Iberian Peninsula (ed. Roxana Recio, 1994)