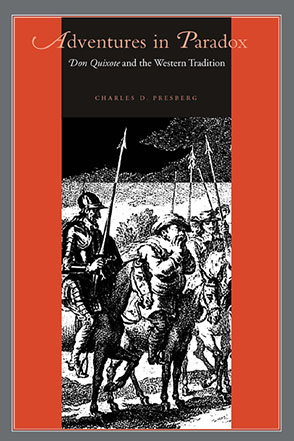 “A beautiful book—one of extraordinary originality—on the pervasive presence of paradox in Cervantes’s masterpiece. Few studies in modern times have so convincingly won their point within the covers of a single volume and added a genuinely new province of understanding to a much-studied and major item of the canon.”—Henry W. Sullivan, Tulane University

Cervantes’s Don Quixote confronts us with a series of enigmas that, over the centuries, have divided even its most expert readers: Does the text pursue a serious or comic purpose? Does it promote the truth of history and the untruth of fiction, or the truth of poetry and the fictiveness of truth itself? In a book that will revise the way we read and debate Don Quixote, Charles D. Presberg discusses the trope of paradox as a governing rhetorical strategy in this most canonical of Spanish literary texts.

To situate Cervantes’s masterpiece within the centuries-long praxis of paradoxical discourse in the West, Presberg surveys its tradition in Classical Antiquity, the Middle Ages, and the European Renaissance. He outlines the development of paradoxy in the Spanish Renaissance, centering on works by Fernando de Rojas, Pero Mexía, and Antonio de Guevara. In his detailed reading of portions of Don Quixote, Presberg shows how Cervantes’s work enlarges the tradition of paradoxical discourse by imitating as well as transforming fictional and nonfictional models. He concludes that Cervantes’s seriocomic "system" of paradoxy jointly parodies, celebrates, and urges us to ponder the agency of discourse in the continued refashioning of knowledge, history, culture, and personal identity.

This engaging book will be welcomed by literary scholars, Hispanisists, historians, and students of the history of rhetoric and poetics.

“A beautiful book—one of extraordinary originality—on the pervasive presence of paradox in Cervantes’s masterpiece. Few studies in modern times have so convincingly won their point within the covers of a single volume and added a genuinely new province of understanding to a much-studied and major item of the canon.”—Henry W. Sullivan, Tulane University

“This study examines the trope of paradox from classical antiquity to the present, with a special focus on its application to early modern Spanish texts, most notably to Don Quixote. This is a significant undertaking, and Presberg manipulates the difficult task of synthesizing rhetoric, philosophy, and literature with competence and elegance. In sum, this is a beautifully crafted work of criticism, original in its own right.”—E. H. Friedman, CHOICE

“This is a fine book written in the tradition of the humanists and scholars it venerates. . . . This is no microhistory, and it is laudable that Presberg is willing to take on the challenge of a topic this large. He acquits himself with finesse, and it is the opinion of this reviewer at least that more books like this one ought to be attempted by scholars and subsequently published by major university presses. . . . This is a book to which professors will direct their students for many, many years to come. It is also a study that reveals how much Hispanism has to say to the larger scholarly community.”—Hilaire Kallendorf, South Central Review

“Presberg’s analysis of this turn of mind and discourse is both ludic and serious as well befits its subject while its range and subtlety belong to the very best of our scholarly tradition.”—Salvador J. Fajardo, South Atlantic Review

“Adventures in Paradox is an essential study for readers interested in the puzzles of logic and storytelling that Cervantes presents to us.”—Stephen Rupp, Modern Language Review

Charles D. Presberg is Assistant Professor of Spanish at the University of Missouri-Columbia. His articles have appeared in MLN, Cervantes, Bulletin of the Comediantes, Hispania, Revista de Estudios Hispanicos, and Laberinto.