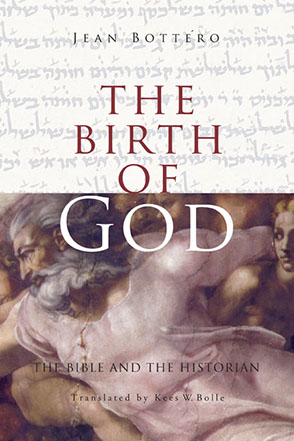 Hermeneutics: Studies in the History of Religions

“In the mountain of recent works on the Bible, written from almost every conceivable angle and espousing every imaginable agenda, rare is the book that couples erudition with the reader’s humility that allows the ancient text to speak in its own, always invigorating voice. This little book by Bottéro largely manages to do just that.

A Selection of the History Book Club

For many people today, the Hebrew Bible is the one supreme channel through which the Word of God was transmitted to humanity. In The Birth of God, Jean Bottéro, one of the world’s leading figures in Ancient Near Eastern Studies, approaches the Bible from a different perspective. He sees in it an astounding variety of documents that reveal much of their time of origin, historical events, and climates of thought. Therefore, we owe to the Bible at least the same respect we give to Homer, Shakespeare, and other classics of world literature. The Birth of God addresses questions that "educated people" usually avoid when the topic of the Bible comes up: What is the Bible if we consider it a historical document? Bottéro is fully aware of the special place the Bible has in the circles of many faithful Jews and Christians, but he focuses on the need for an understanding of Israel as a major root of our entire Western tradition. With grace and insight, he brings out the extraordinary originality of Israel’s questions and ideas, many of which have shaped our thinking ever since. In Bottéro’s hands, Moses, Job, Isaiah, Jeremiah, and other familiar figures take on real life and present to us thoughts we might never have associated with the Bible. He also treats such topics as the origins of the world according to the Bible and original sin. In one remarkable chapter, Bottéro offers a new translation of Ecclesiastes, which casts this biblical book in an entirely new light. Bottéro is a scholar of rare abilities. Internationally respected for his work as a philologist, literary critic, and historian, he is also adept at writing for a popular audience. The Birth of God has been widely read in France, where it was first published in 1986. With this expert translation, English-speaking readers can now enjoy the book for the first time. Upon reading it, many a reader is likely to reflect: "Whenever I have said ‘God,’ in whatever tone of voice, could I ever have meant anyone else than the God of the Bible?"

“In the mountain of recent works on the Bible, written from almost every conceivable angle and espousing every imaginable agenda, rare is the book that couples erudition with the reader’s humility that allows the ancient text to speak in its own, always invigorating voice. This little book by Bottéro largely manages to do just that.
To conclude, this book is like a word from a favorite old uncle who is a bit creaky and set in his ways, but full of wisdom and a passion for life.”—Mark Hamilton, Restoration Quarterly

“Bottéro's book is fascinating for its clarity, its rigor, the character of his language, the splendor of the translations he puts before us, and for the mastery of the learning that underlies everything, but without a trace of ostentation. . . . It is a book for every educated reader, whether believer or unbeliever, who recognizes the Bible as the common good of all human beings.”—Gérard Rochais, Science et esprit

“From the French Edition:
This book is unpretentious and full of interesting insights. . . . It is the product of a mind that can appreciate Israel's intellectual contributions and theological originality precisely because it has thought deeply about the Mesopotamian creative genius.”—Jack M. Sasson, Religious Studies Review

Jean Bottéro, a scholar of rare abilities, is Director Emeritus of Assyriology in the Department of Philology and History at the École pratique des hautes études. Bottéro's other books include Mesopotamia: Writing, Reasoning, and the Gods (1992) and a volume on ancient Mesopotamian cuisine.