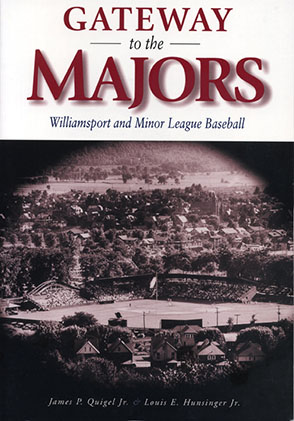 “Lou Hunsinger Jr. and Jim Quigel dig deep into baseball’s roots in North-central Pennsylvania and bring to life details of the events and individuals who have kept America’s National Pastime going strong into the 21st century.”—Jim Carpenter, Williamsport Sun-Gazette

Winner of the 2001 Casey Award Finalist sponsored by Spitball: The Literary Baseball Magazine

Although many people know Williamsport, Pennsylvania, as the "birthplace of Little League Baseball," it is a city with a rich professional baseball tradition. Since the earliest days of the Pennsylvania State Association in the nineteenth century, professional minor league baseball has flourished in Williamsport, and over the years hundreds of players and managers have passed through historic Bowman Field on their way to the major leagues, including Jim Bunning, Ferguson Jenkins, and Nolan Ryan. Gateway to the Majors is a comprehensive history of professional minor league baseball in Williamsport from the earliest days up until the present.

This book breaks new ground by weaving in social history and collective biography to capture the essence of the minor league experience in one city. Drawing upon local Williamsport newspapers, extensive oral histories of former players, baseball administrators, boosters and fans, rare photograph collections, and primary source material from the Baseball Hall of Fame Library and Archives, Gateway to the Majors reconstructs the totality of the professional baseball experience.

Beyond chronicling the seasons, this book sheds light on the contributions of Williamsport native Tommy Richardson as a pioneering minor league administrator and promoter of the game. The accompanying appendix of former Williamsport players who played in the Major Leagues is a valuable reference tool for baseball historians. This book also illustrates how the city’s relationship with baseball forged a distinct civic identity and national reputation as "Baseball Town, USA."

“Lou Hunsinger Jr. and Jim Quigel dig deep into baseball’s roots in North-central Pennsylvania and bring to life details of the events and individuals who have kept America’s National Pastime going strong into the 21st century.”—Jim Carpenter, Williamsport Sun-Gazette

“Gateway to the Majors should be a terrific present for fathers, sons, brothers and uncles because it nostalgically chronicles the ups and downs, woes and successes of baseball heroes who have passed through Williamsport. And the accompanying appendix of former Williamsport players who played in the Major Leagues is a valuable reference for baseball historians.”—Robin Van Auken, Williamsport Sun-Gazette

“Those who recognize this charming Pennsylvania hamlet merely as the home to the Little League World Series will learn there is a great deal more to the town’s baseball lore, with this history that reaches from the nineteenth century right through the new millennium.”USA TODAY Baseball Weekly

“Gateway to the Majors weaves engaging social history and a collective biography of professional minor league baseball as it has existed in Williamsport, Pennsylvania, from the beginnings of baseball in the nineteenth century down to the present day.… Gateway to the Majors is strongly recommended, informative, and entertaining reading for all dedicated baseball enthusiasts!”Midwest Book Review

James P. Quigel Jr. is Head of Historical Collections and Labor Archives, Paterno Library, Penn State University. He grew up in the Williamsport area and has been a lifelong fan of Williamsport baseball.

Louis E. Hunsinger Jr. is a local baseball historian who lives in Williamsport. He is a reporter for the Williamsport Sun-Gazette and a member of the Society of American Baseball Research (SABR). The authors previously collaborated on a pictorial history of professional baseball in Williamsport.