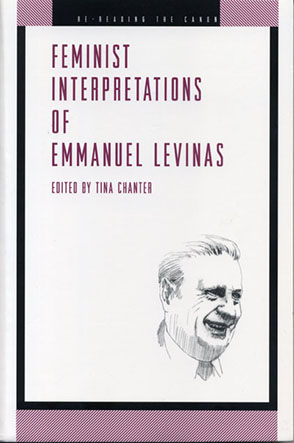 “Chanter has assembles an excellent collection of essays. She acknowledges the conflictual relationship that has existed between feminist scholars and Levinas since feminist theory arrived on the philosophical scene.

This volume of essays, all but one previously unpublished, investigates the question of Levinas’s relationship to feminist thought. Levinas, known as the philosopher of the Other, was famously portrayed by Simone de Beauvoir as a patriarchal thinker who denigrated women by viewing them as the paradigmatic Other. Reconsideration of the validity of this interpretation of Levinas and exploration of what more positively can be derived from his thought for feminism are two of this volume’s primary aims.

Levinas breaks with Heidegger’s phenomenology by understanding the ethical relation to the Other, the face-to-face, as exceeding the language of ontology. The ethical orientation of Levinas’s philosophy assumes a subject who lives in a world of enjoyment, a world that is made accessible through the dwelling. The feminine presence presides over this dwelling, and the feminine face represents the first welcome. How is this feminine face to be understood? Does it provide a model for the infinite obligation to the Other, or is it a proto-ethical relation? The essays in this volume investigate this dilemma.

“Chanter has assembles an excellent collection of essays. She acknowledges the conflictual relationship that has existed between feminist scholars and Levinas since feminist theory arrived on the philosophical scene.
The collection is excellent for feminist scholars who want an introduction to Levinas and important for scholars, upper-division undergraduates, and graduate students of Levinas and feminist philosophy and theology.”—D. J. Livingston, CHOICE

“This collection is a welcome addition to the rapidly growing body of literature centered on Levinas and the project of ethics as ‘first philosophy.'”—Christian Diehm, APA Newsletter on Feminism and Philosophy

“In all, Feminist Interpretations of Emmanuel Levinas is an excellent collection for those interested in Levinas.”—Christian Diehm, APA Newsletter

Emmanuel Levinas (1906–1995) was born in Kaunas, Lithuania, and became a naturalized French citizen in 1930. He was influenced by Edmund Husserl, with whom he studied phenomenology, and Martin Heidegger, among others. It was mainly during the 1950s that Levinas began to work out a highly original philosophy of ethics with the aim of going beyond the ethically neutral tradition of ontology. Levinas's first magnum opus, Totality and Infinity (1961), sought to accomplish this departure through an analysis of the 'face-to-face' relation with the Other.

Tina Chanter is Professor of Philosophy at the University of Memphis and the author of Ethics of Eros: Irigaray's Rewriting of the Philosophers (1995) and Time, Death, and the Feminine: Levinas with Heidegger (2001).