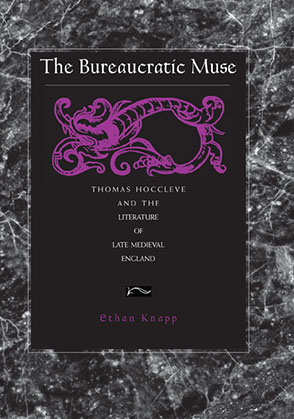 Long neglected as a marginal and eccentric figure, Thomas Hoccleve (1367–1426) wrote some of the most sophisticated and challenging poetry of the late Middle Ages. Full of gossip and autobiographical detail, his work has made him immensely useful to modern scholars, yet Hoccleve the poet has remained decidedly in the shadow of Geoffrey Chaucer.

In The Bureaucratic Muse, Ethan Knapp investigates the connections between Hoccleve's poetic corpus and his life as a clerk of the Privy Seal. The early fifteenth century was a watershed moment in the histories of both centralized bureaucracy and English vernacular literature. These were the decades in which Chaucer's experiments in a courtly English poetry were rendered into a stable tradition and in which the central writing offices at Westminster emerged from personal government into the full-blown modernity of independent civil service. Knapp shows the importance of Hoccleve's poetry as a site where these two histories come together. By following the shifting relationship between the texts of vernacular poetry and those of bureaucratic documents, Knapp argues that the roots of vernacular fiction reach back into the impersonal documentary habits of a bureaucratic class.

The Bureaucratic Muse, the first full-length study of Hoccleve since 1968, provides an authoritative historical and textual treatment of this important but underappreciated writer. Chapters focus on Hoccleve's importance in consolidating key concepts of the literary field such as autobiography, religious heterodoxy, gendered identity, and post-Chaucer textuality. This book will be of interest to scholars of Middle English literature, autobiography, gender studies, and the history of literary institutions.

“Ethan Knapp gives us a persuasive portrait of a still undervalued poet of skill and originality in his urban and professional milieu. This will be the standard book on Hoccleve for years to come.”—David A. Lawton, Washington University

“The Bureaucratic Muse is timely, smart, and well-written. Knapp has a fertile mind, and he is skillful and resourceful in quartering Hoccleve’s peculiarly intelligent poems for his arguments.”—Derek Pearsall, Harvard University

“Most of Hoccleve’s works are thus considered with much detail, making Knapp’s book an indispensable read for anyone interested in the subject. In addition to the fact that this study is very well presented, written and structured, it includes a comprehensive index and boasts an excellent bibliography of eighteen pages. We are thus offered a first-rate tool for late medieval studies.”—Blaise Douglas, Cercles