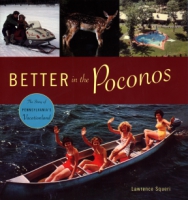 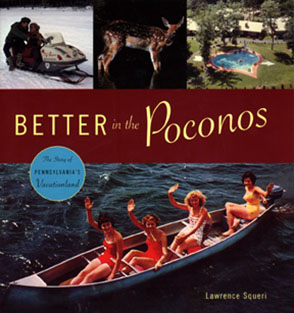 “The book does a fine job of weaving history and the sense of exhilaration of the lodging industry. It’s enough to inspire a trip to the land of love.”—Brian Butko, Pittsburgh Post-Gazette

When Antoine Dutot opened the Kittatinny Hotel—the first tourist hotel in the Poconos—in 1829, little did he know that he was a pioneer in what would become one of the largest and most diverse tourist and recreation areas on the East Coast. Although his initial venture failed, the tourist industry of the Poconos has been a long-term success, evolving and adapting to change. Better in the Poconos tells the story of Pennsylvania’s premier vacationland from its earliest days to the present.

The flourishing tourist and resort industry in the Poconos can be attributed, in part, to the area’s splendid mountains, streams, and forests. But the timeless appeal of nature was matched, and even surpassed, by the resorts’ ability to redefine themselves. In the mid-nineteenth century, William Cullen Bryant depicted the Pocono region as a hunter’s delight, describing abundant game and sublime landscapes. The Victorian era, however, brought genteel carriage rides and croquet; later, specialized ethnic resorts catered to the minority populations of Philadelphia and New York; and in the 1940s and 1950s, the Poconos earned its reputation as a honeymoon paradise. This evolution continues today: the land of romance has given way to the ski resorts and water slides enjoyed by today’s vacationing families.

Poconos resort owners and innkeepers have long recognized the cutthroat competition inherent in the vacation business. Early on, they realized that they were vying not only with each other but also with other resorts—first in the Catskills and on the New Jersey shore, and then in Florida, in the Caribbean, and even in Europe. Better in the Poconos illustrates the strategies by which resorts in northeastern Pennsylvania responded to these market forces. They were compelled to provide superior service and amenities as well as novel amusements and activities for their guests. In the latter half of the twentieth century, for example, "super-resorts" started to supplant the old hotels: the new resorts could offer year-round activities, thanks to the invention of artificial snow. Similarly, honeymoon hotels declined as couples resorts—retreats that boasted such innovations as the heart-shaped bathtub and the Jacuzzi in the shape of a tall champagne glass—emerged on the Poconos scene.

Better in the Poconos recreates that scene and the people who brought it to life—not only the innkeepers, souvenir sellers, laborers, and service workers, but also the community leaders and visionaries who promoted the vacation economy and sought to guide it. The proper Victorians, the devoted sportsmen, the young newlyweds, the families and singles, the staid ladies of the Women’s Christian Temperance Union (and the sinners whose vices they wished to temper), the members of the Ku Klux Klan, the rich Quakers, the Jewish socialists, and the immigrants—all these, and more, make up the humanly rich mosaic of the Poconos.

“The book does a fine job of weaving history and the sense of exhilaration of the lodging industry. It’s enough to inspire a trip to the land of love.”—Brian Butko, Pittsburgh Post-Gazette

“From gorgeous waterfalls to man-made snow, from honeymoon hideaways to ski lifts, many different things contribute to making the Poconos a special place. This book puts all those elements in perspective.”—Rusty Pray, Philadelphia Inquirer

“Freed of preconceived notions, Squeri, a professor of history at East Stroudsburg University, did a first-class job of researching and writing the history of this storied vacation mecca. . . . Whether or not you ever visited this vacation paradise, Better in the Poconos is worth a look.”—Mary O. Bradley, Harrisburg Patriot-News

1. A Niche Resort: The Antebellum Years

2. Here Come the Vacationers: The Poconos After the Civil War

7. Guess Who’s Coming to the Poconos? The Rise of Ethnic Resorts

9. The Poconos at Midcentury: The Last of the Good Old Days