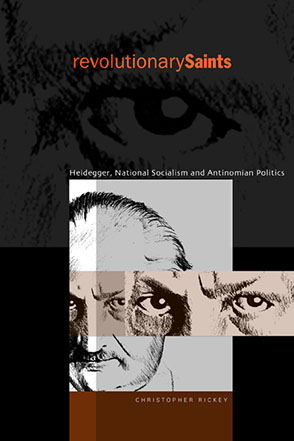 “A strikingly original interpretation of Heidegger’s politics that explores the religious sources of his idiosyncratic vision of National Socialism.”—Bernard Yack, University of Wisconsin-Madison

Heidegger's connection with Nazism is well known and has been exhaustively debated. But we need to understand better why Heidegger believed National Socialism to be the best cure for the ills of modern society. In this book Christopher Rickey examines the internal logic of Heidegger's ideas to explain how they led him to become a powerful critic of liberalism and a Nazi supporter.

Key to Rickey's interpretation is the radically antinomian conception of religiosity he finds at the core of Heidegger's challenge to modernity. Heidegger responds to the crisis of modernity with a philosophy attuned to the fundamental need for humans to live with the proper stance toward the divine. Inspired by Lutheran and mystical theology, Heidegger outlines an essentially religious conception of authentic human being. Like his radical Lutheran forerunners, Heidegger politicizes the radical strains of Luther's theology to create a potent revolutionary brew: the revolution of the saints.

Rickey traces out the ways in which these currents fundamentally shape Heidegger's thought: the Lutheran background to his critique of modern science and the technological rationality it spawns; his transformation of Aristotle's prudential conception of practical wisdom into the total revelation of being that lays the basis for revolutionary political action; and his mystical and sectarian understanding of authentic community.

Rickey shows how this political-theological vision forms the basis of Heidegger's concrete political action, and he concludes with an analysis of the fundamental problems this vision poses to our political thinking today.

“A strikingly original interpretation of Heidegger’s politics that explores the religious sources of his idiosyncratic vision of National Socialism.”—Bernard Yack, University of Wisconsin-Madison

“This is an interesting, original, and persuasive text, one of the most thoughtful presentations of Heidegger to be published recently. Highly recommended for academic libraries.”—R. Severson, CHOICE

“Rickey has written one of the most tightly argued and persuasive briefs, as it were, for the case in favor of the unity of Heidegger as political man and primordial thinker of the ‘history of being.’”—Horst Mewes, Perspectives on Politics

“The considerable interest of Rickey's work is to show in detail that Heidegger is not the proto-communitarian he is sometimes described as, but rather a peculiar kind of failed Christian communitarian, loyal not to human beings but to being.”—Tom Rockmore, Duquesne University

Christopher Rickey is an attorney working in New York City.