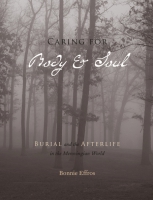 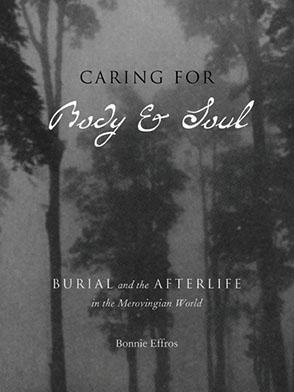 The relationship between the living and the dead was especially significant in defining community identity and spiritual belief in the early medieval world. Peter Brown has called it the "joining of Heaven and Earth." For clerics and laypersons alike, funerals and burial sites were important means for establishing or extending power over rival families and monasteries and commemorating ancestors. In Caring for Body and Soul, Bonnie Effros reveals the social significance of burial rites in early medieval Europe during the time of the Merovingian (or so-called long-haired) kings from 500 to 800 C.E.

Funerals provided an opportunity for the display of wealth through elaborate ceremonies involving the placement of goods such as weapons, jewelry, and ceramic vessels in graves and the use of aboveground monuments. In the late seventh century, however, these practices gave way to Masses and prayers for the dead performed by clerics at churches removed from cemeteries. Effros explains that this shift occurred not because inhabitants were becoming better Christians, as some have argued, since such activities were never banned or even criticized by the clergy. Rather, clerics successfully promoted these new rites as powerful means for families to express their status and identity.

Effros uses a wide range of historical and archaeological evidence that few other scholars have mastered. The result is a revealing analysis of life and death that simultaneously underlines the remarkable adaptability and appeal of western Christianity in the early Middle Ages.

“An attractive, well-produced book. . . . It is of interest both to early medieval scholars, and to those who wish to consider some, at least, of Merovingian ‘deathways’ in a larger perspective.”—Bailey K. Young, The Medieval Review (TMR)

“These reservations aside, this is an important book that will be extremely useful for both students and scholars interested in the topic. Effros is familiar with both the primary and the secondary sources, and her clear and precise style brings some life to this gloomy and rather morbid chapter of Merovingian cultural history.”—Yitzhak Hen, American Historical Review

“Minor criticisms (and they are minor) aside, this is a very valuable book. It deserves a wide readership and will be very useful for teaching. Above all, it is to be hoped that archaeologist of Ango-Saxon England read it.”—Guy Halsall, History

“Effros has produced a well-written and well-researched book, which will serve as an excellent introduction to anyone approaching the topic of early-medieval funerary rituals for the first time.”—Cristina La Rocca, Speculum: A Journal of Medieval Studies

Bonnie Effros is Associate Professor of History at SUNY Binghamton and, during 2001-2002, the Sylvan C. Coleman and Pamela Coleman Memorial Fund Fellow at the Metropolitan Museum of Art. She is author of the book, Merovingian Mortuary Archaeology and the Making of the Early Middle Ages (2003).