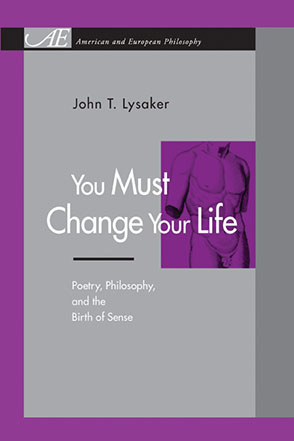 “An engaging exploration of the power of poetry, this book offers something new and refreshing: drawing thoughtfully on Heidegger’s approach to poetic language, Lysaker brings it into dialogue with the striking work of Charles Simic.”—Richard Polt, Xavier University

Some poems can change our lives; they lead us to look at the world through new eyes. In this book, inspired by Martin Heidegger—who found in poetry the most fundamental insights into the human condition—John Lysaker develops a concept of ur-poetry to explore philosophically how poetic language creates fresh meaning in our world and transforms the way in which we choose to live in it.

Not limited to a single poem or collection of poems, ur-poetry arises when, in the interaction of an author's principal tropes, the origin of poetry is exposed as a process whereby words with inherited meaning take on a new poetic life that draws our attention to the "birth of sense"—the manner in which the manifold realities that surround us are revealed. And it is precisely through an experience of the birth of sense that we are able to understand and dwell differently among these realities.

To demonstrate ur-poetry in action, the book frequently refers to such poets as Akhmatova, Ammons, Celan, Mandelstam, and Stevens, but it focuses on the work of Pulitzer Prize winner Charles Simic. By addressing the nature of human existence, the origins of sense, and the significance of history in and for human action, Lysaker argues that Simic's writing exemplifies the import that poetry can have for how we understand and live our lives.

“An engaging exploration of the power of poetry, this book offers something new and refreshing: drawing thoughtfully on Heidegger’s approach to poetic language, Lysaker brings it into dialogue with the striking work of Charles Simic.”—Richard Polt, Xavier University

John T. Lysaker is Associate Professor of Philosophy at the University of Oregon.

Introduction: Engaging the Work of Art

“But never can any advantage of nature be taken by a trick.”

What follows in an attempt to work philosophically with poetry, and in a way that respects its manner of presentation. Of course, one could attempt to ferret out conclusions and their supporting premises, approaching the poem as a kind of argument. To do so, however, forgoes a dialogue with the poem in its objectivity and effectively reduces its form of presentation to ornamentation, thus suggesting, if only implicitly, that poetry is petit bourgeois ratiocination. Unwilling to begin by translating poems into a so-called ‘properly philosophical idiom,’ I have thus, in a manner that owes much to Heidegger, tried to fashion a site where poems and philosophical questions, reflection, and argument might meet and complement one another in response to what, after Jean Luc Nancy, I have termed the birth of sense, “sense” denoting the principal character with which something exists or occurs, e.g. as a part of a large whole, as the creation of a creator, or as atoms collecting and dispersing in a void according to the whims of efficient causality.

My title, You Must Change Your Life, an ambitious one, is drawn from Rilke’s poem, “Archaic Torso of Apollo.” The point is not to install poetry at the vanguard of self-help. Nor is it to suggest that poetry is a potential font of practical maxims by which we might live. Rather, I will try to convince you that certain poems enable us to experience the birth of sense in such a radical fashion that they transform the sense of all that is, e.g. ourselves, others, rocks, lichens, asteroids, and orbits. Unfortunately, we haven’t a proper feel for those kinds of poems or that kind of import. In writing this essay, my hope is cultivate that feel, to sharpen the ears we bring to certain poems so that we might see how thoroughly they are able to change our lives.

As a dialogue between philosophy and poetry this text is designed for an audience beyond but including professionally philosophical circles. My hope is that poets as well as philosophers will find something fresh here, both with regard to my notion of ur-poetry as well and its import. To the end of a wider audience, I have not sacrificed whatever rigor I thought the matter at hand demanded, however. Given that so little if anything is obvious, it is justifiable to demand clarity and to berate a clarity that obscures. To my mind, one’s obligations begin with one’s subject matter, and it is out of that obligation that one should determine what clarity and communicability involve as well as what relation one’s diction and syntax should have to ordinary language, if there is such a thing. In other words, I have tried to say things as plainly as possible, and at times this has required me to go against the currents of ordinary language. If I’d only held my nose right, I could have done better. However, I do not think I could have tried harder.