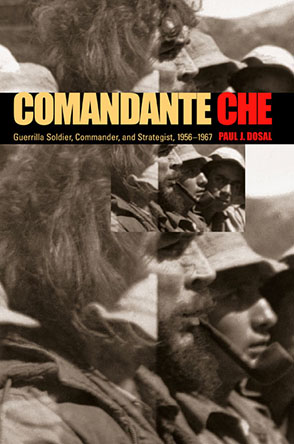 “This is a solid, realistic study of a man, not an icon. As the title suggests, Paul Dosal portrays the complete Che Guevara, but, above all, he is unsurpassed in revealing Che the guerrilla soldier—the grunt, the guy in the mud, facing death and killing ruthlessly.”—Charles Ameringer, Penn State University

The victory of Fidel Castro’s rebel army in Cuba was due in no small part to the training, strategy, and leadership provided by Ernesto Che Guevara. Despite the deluge of biographies, memoirs, and documentaries that appeared in 1997 on the thirtieth anniversary of Guevara’s death, his military career remains shrouded in mystery. Comandante Che is the first book designed specifically to provide an objective evaluation of Guevara’s record as a guerrilla soldier, commander, and strategist from his first skirmish in Cuba to his defeat in Bolivia eleven years later.

Using new evidence from Guevara’s previously unpublished campaign diaries and declassified CIA documents, Paul Dosal reassesses Guevara’s impact as a guerrilla warrior and theorist, comparing his accomplishments with those of other guerrilla leaders with whom he has been ranked, including Colonel T. E. Lawrence, Mao Tse-Tung, and General Vo Nguyen Giap.

This reassessment reveals that Guevara was often underrated as a conventional military strategist, overrated as a guerrilla commander, and misrepresented as a guerrilla theorist. Guevara achieved his greatest military victory by applying a conventional military strategy in the final stages of the Cuban Revolution, orchestrating the defensive campaign that held off the Cuban army in the summer of 1958. As a guerrilla commander, he scored impressive victories in ambush after ambush in Bolivia, but in winning the battles he lost the war. He violated most of his own precepts during the Bolivian campaign, compelling analysts to question the validity of both his strategies and his command skills.

Though he is credited with developing foco theory, Guevara never attempted to advance a new theory of guerrilla warfare. He was a fighter, not a theorist. He wanted to defeat American imperialism by launching guerrilla campaigns simultaneously in Asia, Africa, and Latin America, but his tricontinental strategy resulted in failures first in the Congo and then in Bolivia. Comandante Che presents the full record of Guevara’s successes and failures, separating myth from reality about one of the twentieth century’s most controversial revolutionary figures.

“This is a solid, realistic study of a man, not an icon. As the title suggests, Paul Dosal portrays the complete Che Guevara, but, above all, he is unsurpassed in revealing Che the guerrilla soldier—the grunt, the guy in the mud, facing death and killing ruthlessly.”—Charles Ameringer, Penn State University

“This outstanding work is the first comprehensive, objective, and truly professional study of the contribution of Che Guevara to the theory and practice of revolutionary guerrilla warfare in the twentieth century. It is based on a thorough and careful reading of the relevant primary sources—principally, Che’s voluminous campaign diaries, along with recently declassified CIA documents on his operations in the Congo and Bolivia.”—Neill Macaulay, University of Florida

“He [Dosal] does not pretend to deal with Guevara’s personal life or his career as a bureaucrat in Cuba, but despite those deliberate omissions, if one could read only a single book about Guevara, this would not be a bad choice.”—Henry Butterfield Ryan, The Americas

“This is an interesting and clearly-written study of Che the soldier and strategist, intended ‘for both scholars and the general public.’”British Bulletin of Publications

Paul J. Dosal is Professor of History at the University of South Florida.

2. The Making of a Revolutionary

3. The Making of a Guerrilla

5. All Guns to the Sierra

6. The Conquest of Santa Clara

9. The History of a Failure

In October 1992, the twenty-fifth anniversary of Che Guevara’s death, I started to research the life of Ernesto Che Guevara. Although there were dozens of books and articles about Che, I realized that I knew little about the life and career of this important figure. The definitive biography of the legendary guerrilla had not yet been written. I initially set out to write the life history of Che Guevara, hoping that I would have the honor of writing the first scholarly biography of Che. That honor fell on others more capable than myself. Four comprehensive biographies of Che Guevara appeared in 1997, the thirtieth anniversary of his death. They covered Che better than I could have done, and the many citations to their work in this book show how much I owe to their impressive work.

About two years after commemorative activities ceased, I reopened my Che files and began to think about what I might do with all the data I had accumulated about Che. I had already read every speech, article, book, letter, and diary written by him. I had read just about everything ever written about him as well. I wanted to make a contribution to the growing literature about Che Guevara, but I was not sure what I could add. Finally, after liberating my repressed interest in military history, I decided to change the project from a comprehensive biography to a study of Che’s career as a soldier, commander, and strategist.

I was originally trained as a political-economic historian at Tulane University under Dr. Ralph Lee Woodward Jr., focusing on Central American history. In writing about Che’s military career, I have broadened the boundaries of my geographical and topical interests. I taught myself basic military history by reading extensively on the U.S. Civil War and World War II. I have come to admire the technical expertise and narrative skills of writers and historians such as Shelby Foote and Stephen Ambrose, both of whom demonstrated that military history is a viable, exciting, and important field of inquiry.

Yet this book is more than a military history. Fighting and winning a guerrilla campaign is not simply a question of devising the proper strategy, applying the right tactics, or selecting the appropriate weapon. The object of the guerrilla is not so much to win a military engagement as to avoid losing it. Guerrilla warfare, as Che fought and taught it, is a political and social struggle as well as a military conflict. If political factors do not favor the guerrillas, they will lose, as Che discovered in Bolivia. Ambushes, battles, and skirmishes figure prominently in the following account, but the analysis does not start and end with them. To assess Guevara’s career as a guerrilla soldier, commander, and strategist, one must analyze it in its proper political context, examining Che’s ideological development; his personal relations with Fidel Castro; and even Soviet, Chinese, and American policies toward the Cuban Revolution and Latin America.

The life of a guerrilla is filled with long moments of inactivity, broken occasionally by the forced night march or the surprise attack. During the many pauses in his guerrilla campaigns, Che read and wrote extensively. His complete works, constituting more than nine volumes, form the primary source of information for this study. He kept campaign diaries wherever he fought, and most of these have been published and translated. Parts of his diaries have been censored, and more documents are locked away in Cuban archives, but the available literature, including a rich vein of memoirs written by people who fought for and against Che, forms a solid foundation for the study of Che Guevara’s military career.

Che Guevara remains a well-known figure, whether adored or reviled, to millions around the world. The thirtieth anniversary of his death, highlighted by the discovery of his unmarked Bolivian grave and the transfer of his remains to Cuba, demonstrated the remarkable durability of his image and his message. I have tried not to get caught up in the Che mania that swept the world five years ago. Students, colleagues, and friends who knew of my research on Che gave me Che posters, shirts, socks, and underwear, thinking that I would appreciate such gifts. I usually gave those items away, preferring to keep just a few images of Che in my office to remind myself that he was a real man who influenced the lives of millions, for better or worse. He killed for a cause; he ordered people to kill for that cause; he advocated war to the death against imperialism; and he died for his principles. His life and death is in many ways a modern tragedy, not a cause for celebration. We must study who he was, why he fought, why he died, and why so many followed him into battle. I have tried to analyze his career as objectively as possible, sorting myth from reality in an effort to assess Guevara’s actual impact on twentieth-century military history.

I have received generous assistance and encouragement along the way. Ann Shuh was with me from the start to the finish of the project, sharing my frustrations. Her careful reading of the manuscript showed that she also shared my ambitions. John Belohlavek, my friend and colleague from the University of South Florida, reviewed the manuscript and offered his military expertise. I thank him for his assistance and the many happy hours we spent together talking about the Civil War. I also want to thank Mike Conniff, a wonderful friend and supportive colleague, for all the encouragement he has offered. Neill Macaulay and Charles Ameringer offered perceptive and constructive critiques of the manuscript as well. I hope that I have addressed their questions and concerns in this final product.

A number of friends and colleagues in Cuba have helped me. Marel García shared her expertise and put me in contact with some of Che’s closest associates. I also want to thank Miriam Rodríguez of the University of Havana for facilitating my research and travel. Gabriel Cartaya kindly escorted me in and around the Sierra Maestra to see La Plata, Santo Domingo, Alegría del Pío, and other sites associated with the Cuban insurrection. The late Enrique Sosa, a dear friend, shared with me his love of Cuba before his passing in March 2002.

I offer a special thanks to my old soccer buddy Rick Pope, who graciously offered to prepare my maps. My good friends Joe Costa and Christy Paul read and commented on earlier versions of the manuscript, helping me to bring out aspects of Che’s life that I might otherwise have overlooked. Joe, like Theresa, Ross, Tami, John, Belinda Allen, Dave, Kenny, Jocelyn, Jimmy, Mike, Dodd, Scott, Valerie, Mike Ortiz, and Tara, have helped me just by making sure that I had a good time. The same goes for all my friends at the revived Cuban Club of Tampa, particularly Jorge and Ileana Díaz, Mario González, Alex Solera, Alex de Quesada, Frank Castillo, Raúl Lavín, Reinaldo Garrido, Fernando Mesa, Dr. Angelo Pérez, José Vivero, and many others.

I have a large, loving, and supportive family to thank: Mom, Dad, Michael, Cindy, Jessica, Duane, Rhonda, Lindsey, Brooke, Madison, Darlene, Michael, and Andrew. We have all suffered in recent years, but we are stronger for having lived through it.

I am not sure that I am any better for having worked so long on this project, but I hope that the literature on Che is richer for it. This book is offered as a modest contribution to a controversial historical subject and is designed for both scholars and the general public. I do not intend to settle the arguments about Che’s record, but I will enjoy participating in the debates to come.