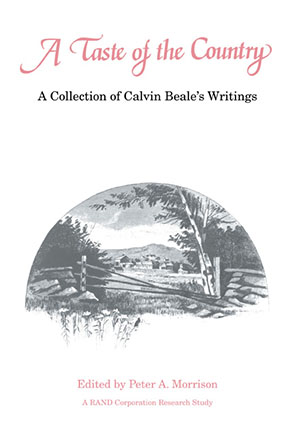 Beale has devoted his professional career—and also much of his spare time—to studying rural areas and their inhabitants. Since the 1950s, he has studied places that most urban Americans have not seen and do not know: the Mississippi Delta, the Ozark-Ouachita Uplands, Appalachia, and the Corn, Cotton, Tobacco, and Peanut Belts. His observations and interpretations offer an uncommon "taste" of this country and the directions of change that are underway.

Peter A. Morrison has assembled Beale's most insightful writings on the nation's subregions and on how rural people live their lives. The passages afford factual information enriched by the author's insights into the transformations of rural America. Chapters highlighting four aspects of rural commonality and diversity are captured in his writings: the regional settings, the towns and communities, the people, and the transformations underway in all three.

"For generations in our national life, progress was the preserve of cities," Beale wrote in 1981. "Inventions, standards of services, and social styles and trends lagged in their adoption in rural areas. The countryside was a time machine in which urbanites could see the living past, and feel nostalgic or superior, as the sight inclined them." Calvin L. Beale headed the Population Section of the Department of Agriculture's Economic Research Service in Washington, D.C., where he is now Senior Demographer. His research has focused on rural, regional, and ethnic trends and composition. He is author or coauthor of "The Revival of Population Growth in Nonmetropolitan America," "Rural Development in Perspective," and Economic Areas of the United States.

Peter A. Morrison is on the senior staff of The RAND Corporation and is director of RAND's Population Research Center in Santa Monica, California. He is author or coauthor of "The Prism of Migration," "How Demographers Can Help Legislators," and Demographic Challenges in America's Future.