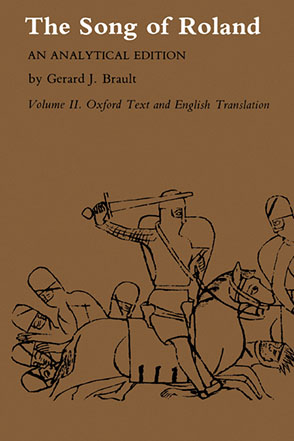 The underlying theme of this new edition is that the poem is a Christian hero. As imagined by the poet Turoldus—writing about 1100, at the time of the First Crusade—Roland, the nephew of Charlemagne, had no faults and accomplished mighty deeds in warring against the Saracens. The introduction compares the known historical facts about the Battle of Roncevaux with the Roland legend, with various versions of the poem, and with the Oxford text. Christian thought and sensibility are shown to permeate the Chanson de Roland, in its character portrayal and narrative development, as well as in its tone and diction—and to provide its thematic unity and metaphorical consistency. Influences of the oral tradition of the chansons de geste are demonstrated, as are evidences of the accompanying gestures used by the jongleurs in interpreting these works.

The Commentary organizes discussion of the 4002 verses into 49 units. The method of analysis is eclectic, combining thematic criticism with philology, exegetical interpretation with iconography. The 66 illustrations, primarily from Romanesque works of art, clarify key passages

Gerard J. Brault is Edwin Erle Sparks Professor Emeritus of French and Medieval Studies and Fellow Emeritus of the Institute for the Arts and Humanities at The Pennsylvania State University. He began his research for this landmark edition in 1968 while a Guggenheim Fellow and Fulbright-Hays Research Scholar in Strasbourg, France. In 1978, the year it appeared, this work was selected by Choice: The Journal of the Association of College and Research Librarians as an Outstanding Academic Book. In 1985, Professor Brault was elected International President of the Société Rencesvals (pour l'étude des épopées romanes), the only American ever to serve in that office. The author of seven other books and more than a hundred articles, he is also internationally known for his research in medieval heraldry and in French-Canadian language and culture.