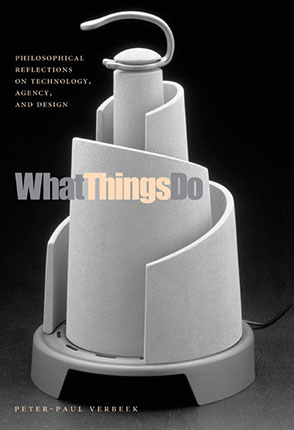 Our modern society is flooded with all sorts of devices: TV sets, automobiles, microwaves, mobile phones. How are all these things affecting us? How can their role in our lives be understood? What Things Do answers these questions by focusing on how technologies mediate our actions and our perceptions of the world.

Peter-Paul Verbeek develops this innovative approach by first distinguishing it from the classical philosophy of technology formulated by Jaspers and Heidegger, who were concerned that technology would alienate us from ourselves and the world around us. Against this gloomy and overly abstract view, Verbeek draws on and extends the work of more recent philosophers of technology like Don Ihde, Bruno Latour, and Albert Borgmann to present a much more empirically rich and nuanced picture of how material artifacts shape our existence and experiences. In the final part of the book Verbeek shows how his “postphenomenological” approach applies to the technological practice of industrial designers.

Its systematic and historical review of the philosophy of technology makes What Things Do suitable for use as an introductory text, while its innovative approach will make it appealing to readers in many fields, including philosophy, sociology, engineering, and industrial design.

“This is really a good book. The goal is to advance our philosophical and cultural understanding of technology with a focused interpretation of artifacts or material culture. . . . Verbeek demonstrates a solid appreciation of what has gone before him, fairly explicates and criticizes (his criticisms are always judicious and acknowledge others), and then creatively extends the movement toward a fuller appreciation of artifacts. If I were to give this book my own title, it would be ‘Artifacts Have Consequences’ (playing off the Richard Weaver book ‘Ideas Have Consequences’).”—Carl Mitcham, Colorado School of Mines

“In this insightful examination of the technological mediation in human action, he both poses new philosophical and societal questions, and offers a new way of bringing ethics into the practice of designing technical artifacts.”—Katinka Waelbers, Science and Engineering Ethics

Peter-Paul Verbeek is a teacher and researcher in the philosophy of technology at the University of Twente in the Netherlands. His book was originally published in Dutch under the title De daadkracht derdingen: Over techniek, filosofie en vormgeving (2000).

3. Toward a Philosophy of Artifacts

Part I: Philosophy Beyond Things

1. Technology and the Self

1.5 The Neutrality of Technology

2. The Thing about Technology

3.4 Toward a Postphenomenology of Things

4.2 Relations Between Human Beings and Artifacts

5. The Acts of Artifacts

6. Devices and the Good Life

6.3 Technology and the Good Life

6.6 Conclusion: The Mediation of Action and Experience

7.2 The Materiality of Things

7.3 Toward a Material Aesthetics

What role do artifacts play in our technological culture? The technological developments of the past century have made this question more pressing than ever. Our society is saturated with tools, appliances, and other assorted objects that strongly shape the course of daily life in many ways. Our personal interactions are inextricably bound up with telephones and computers; our traveling with bicycles, automobiles, trains, and airplanes; our eating with refrigerators, ovens, and microwaves; our leisure activities with televisions, videos, and electronic devices. Even our being born, staying healthy, and dying depend on a wide variety of medical instrumentation. What effect do these things and artifacts have on us? How can we understand their role in our lives?

Until recently, philosophers have paid scant attention to this question, preferring to devote their attention to words and ideas rather than material things. The history of philosophy ever since Plato has tended to assign a secondary status to material and changeable things in favor of eternal and unchangeable ideas. The “linguistic turn” which philosophy took in the past century is only the most recent manifestation of this horror materiae. Since this turn, the language in which human beings speak about reality is thought to determine what may count as reality. But this turns things into little more than projection screens for our interpretations, reduces them to the words with which we describe them, and fails to give them their due, their proper weight. However important the role of language may be, its absolutization assures that things and artifacts can no longer be philosophically analyzed, only talked around.

But not only philosophy has failed to recognize the significance of things and their materiality—so has contemporary postmodern industrial design, whose products are devised principally to serve as signs rather than material things, as symbols or icons for their owners’ lifestyles. Postmodern consumers purchase objects less for their materiality than for their ability to express the kind of person they want to be taken as. “We sell lifestyles, not appliances,” as Braun Electronic GmbH business executive Godehard A. Günther is quoted in a textbook for industrial designers. The same textbook quotes the French luggage manufacturer Louis Vuitton as saying: “We produce travel merchandise of the highest quality, of course . . . but apart from that we also sell myths and dreams, and a particular style of traveling. Luxury, independence, and the feeling of flexibility characterize the owner of Vuitton luggage” (Bürdek 1996, 228). Products are deliberately designed for lifestyles whose latest trends are tracked by market researchers.

Despite all the recent talk about the “material world” and “modern materialism,” we have managed to expunge artifacts of their materiality both in our thinking about and in our design of them. Now that we have survived the death of God and the death of the subject, we seem to be faced with the death of the thing. Therefore, as an alternative to the prevailing Platonist and immaterialist approaches to artifacts and materiality, I shall be trying to develop a philosophical perspective in which more justice can be done to the role of artifacts in contemporary culture and in the everyday life of human beings.

The attempt to give artifacts their due is, of course, not without danger. For instance, one group of thinkers in the history of philosophy has lamented the loss of materiality by characterizing it as a form of alienation. These thinkers, that is, understand changes in our material world as a loss of authenticity, as a growing estrangement from what things “really” are. The linguistic turn and the rise of postmodernism have made this view untenable, however, for these movements have demonstrated the ultimate senselessness of entertaining the hope that human beings can have access to “reality itself”. The contact that human beings have with reality is context-dependent: “reality” is not unequivocally reachable, let alone able to function as a norm. The challenge of a philosophy of materiality, as I see it, therefore consists of navigating between the shoals presented by a too-conservative philosophy of alienation and by a too-radical strict linguistic philosophy. Only in this manner can things be brought back from the dead in a creditable manner. An approach to things must be found that neither reduces them to non-thingly elements nor falls prey to the alienation thesis.

This study aims to develop this new way of thinking in particular with respect to technical or technological objects, which are the most distinctive class of objects in contemporary technological culture. The case for a “thingly turn” is most pressing within the philosophy of technology, for it, too, has neglected the value of artifacts, with serious consequences for the standard picture of technology that it has produced. This picture is dominated by the above-described alienation thesis, and has a strongly negative cast. It represents technology as a radically transformative power which estranges human beings from themselves, from each other, and from reality itself. Technological culture is seen as transforming human beings into cogs in a social machine, and as transforming reality into raw material that can only be approached via domination and control.

This standard picture of technology, evident in the work of Karl Jaspers and Martin Heidegger, has been subjected to harsh critique in recent years. Empirical studies of the development and use of specific technologies point to the need for a more nuanced approach. But it would be rash to conclude that classical philosophy of technology has become entirely obsolete. The questions it posed are still pressing; its problems lie in the ways it has gone about pursuing the answers. The first chapters of this book show, on the basis of a close analysis of Jaspers’ and Heidegger’s philosophies of technology, that each of these thinkers approached technology from frameworks that reduce technological artifacts to non-technological elements such as social organization and the will to power. This analysis shows that the failure to take artifacts seriously was fatal to classical philosophy of technology.

The questions posed by classical philosophy of technology deserve a new set of answers, one that does justice to the concrete presence of technological artifacts in our culture. In this book, I attempt to do so by taking up concepts and theories provided by several contemporary philosophers of technology, including Don Ihde, Albert Borgmann, and Bruno Latour. I shall undertake a systematic analysis of the relations between human beings and technological objects, in the course of which I discuss the connection to contemporary industrial design, which continually turns out products that play an extensive role in shaping everyday life. The resulting “philosophy of artifacts” aims to shed more light on this process, and to allow the philosophy of technology to be productively turned toward practical design issues.

How to approach technology in terms of “things” or artifacts is not obvious. As already mentioned, classical philosophy of technology has devoted little enough thought to the role of technological artifacts in contemporary society and daily life. It tends to approach technology in terms of what technology requires or presupposes; the kinds of technological thinking it fosters, for instance, or the principles around which our social life must be organized in order for technology to function in it. If concrete technologies enter in to these analyses, it is merely as illustrations of the origins or presuppositions of technology and not as points of departure for investigation into how technologies concretely shape human life. Classical philosophy of technology has come under severe criticism for this kind of approach, and in what follows I shall try to make clear that it is precisely the neglect of a treatment of concrete technological artifacts that opens it up to such critique.

Its Nature, Ethics, and Promise

The Epistemic and Moral Authority of Science