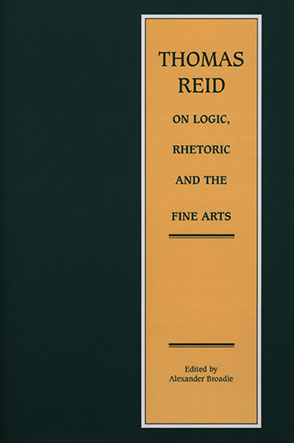 Though virtually unknown today, this material in fact relates closely to Reid’s published works and in particular to the late Essays on the Intellectual Powers of Man and Essays on the Active Powers of Man. When composing these works, Reid drew primarily on his lectures on “pneumatology,” which presented a theory of the mental powers, broadly conceived. These lectures were basic to the course on the culture of the mind that explained the cultivation of the mental powers. Although the Essays also included some elements from the material on the culture of the mind, the bulk of the latter was left in manuscript form, and Alexander Broadie’s edition restores this important extension of Reid’s overall work.

In addition, this volume continues the attractive combination of manuscript material and published work, in this case Reid’s important and well-known essay on Aristotle’s logic. This text was corrupted in earlier editions of Reid’s works and is now restored to the state in which Reid left it.

This volume underscores Reid’s great and growing significance, viewed both as a historical figure and as a philosopher. At the same time, it is of great interdisciplinary importance. While the material emerges directly from the core of Reid’s philosophy, as now understood, it will appeal widely to people in literary, cultural, historical, and communications studies. In this regard, the present volume is a true fruit of the Scottish Enlightenment.

Alexander Broadie is Professor of Logic and Rhetoric at the University of Glasgow.