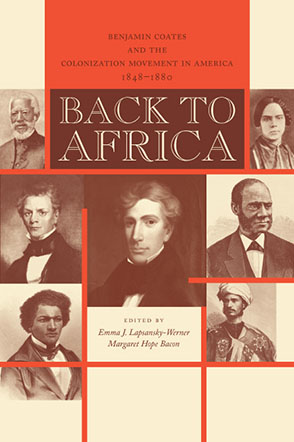 “Back to Africa is a terrific collection of letters, one of the most important to emerge on nineteenth-century reform in years. The numerous letters from well-known black and white abolitionists, coupled with the retrieval of letters written as well as received by Coates, make this an indispensable book for anyone interested in nineteenth-century race relations and reform.”—John Stauffer, Harvard University

Benjamin Coates was one of the best-known white supporters of African colonization in nineteenth-century America. A Quaker businessman from Philadelphia and a sometime officer of the Pennsylvania Abolition Society, he was committed to helping black Americans relocate to West Africa. This put him at the center of a discourse with abolitionists at home and abroad, including such leading thinkers as Joseph Jenkins Roberts, Mary Ann Shadd Cary, Henry Highland Garnet, Frederick Douglass, Alexander Crummell, George L. Stearns, and William Coppinger.

Creative and restless, cantankerous and charismatic, these men and women dominated the struggle to end slavery and to achieve respect for African Americans. Back to Africa sheds new light on these remarkable personalities and their tireless efforts at reform.

“Back to Africa is a terrific collection of letters, one of the most important to emerge on nineteenth-century reform in years. The numerous letters from well-known black and white abolitionists, coupled with the retrieval of letters written as well as received by Coates, make this an indispensable book for anyone interested in nineteenth-century race relations and reform.”—John Stauffer, Harvard University

Emma J. Lapsansky-Werner is Professor of History and Curator of Special Collections at Haverford College.

Margaret Hope Bacon is the author of numerous books, including One Woman's Passion for Peace and Freedom: The Life of Mildred Scott Olmsted (1993).

The Colonizationist Correspondence of Benjamin Coates

Appendix I: Benjamin Coates' Will

The United States is a nation of immigrants. Beginning-we believe-with immigration from Asia, tens of thousands of years ago, continuing with immigration from Europe and Africa several centuries ago, then picking up velocity in the eighteenth, nineteenth, and twentieth centuries, a diverse collage of peoples and cultures have created a heterogeneous mix on the North American continent. But for the last few centuries, at least, immigration and emigration have been tense and contentious subjects, shaping Americans' notion of race, of land-ownership, of the management of social problems. Though Americans have not always been welcoming to all newcomers, the Statue of Liberty remains the symbol of our conviction that relocation can relieve the “tired, poor, huddled masses” from the pain of social oppression. This volume highlights one sub-theme that is part of that conviction. It explores the relationship between the abolition of slavery and the establishment of a black colony in West Africa, as seen through the essays and correspondence of one resolute Quaker, Benjamin Coates. Coates, a businessman of international connections, described himself as “a thorough abolitionist, [who] could not be such without being a Colonizationist.” (Benjamin Coates to William Coppinger, June 6, 1866.) In pursuit of this single-minded mission, Coates made friends with Joseph Jenkins Roberts, Liberia's first black president. He also kept up a brisk correspondence with others across the world that he hoped to enlist in these causes.

In 1998, Haverford College purchased the collection of more than 100 letters, which form the nucleus of this volume. These letters were written by various nineteenth-century abolitionists to Philadelphia Quaker Benjamin Coates, one of the best-known nineteenth-century white supporters of African colonization. But Coates was more than a Quaker and a supporter of colonization. He was a dedicated, life-long member of the Religious Society of Friends (Quakers), and it is this dedication that shaped his connection to Haverford College. Haverford's collections already held many other materials from the extended Coates family, for Haverford's status as the first college established by the Orthodox branch of the Religious Society of Friends made it part of the fabric of Coates life. He served as a member of the college's governing board and probably helped to support several of his nephews while they studied at Haverford. The Coates family, made up of noted Philadelphia business people and philanthropists, owned a number of residential and business properties near the Friends meeting house at Fourth and Arch Streets, which encouraged and supported the college. In 1937, when one of these properties was sold, Benjamin Coates' voluminous correspondence went to live in the attic of a descendant. There it languished for more than six decades before the abolitionist segment of the materials was offered to Haverford College.

Three summers were devoted to annotating the letters to Coates, and to locating and annotating letters from Coates between 1848 and the end of Coates' active life in the racial justice movement of his day. The year 1848 marks the beginning of Coates' friendship with Roberts, and of Roberts' presidency of Liberia, as the west African country becomes an independent republic. The friendship and correspondence between the two men is, ironically, predicated on their agreement that they should live in separate societies and the correspondence presented here-though by no means limited simply to the interchange between these two colonizationists-mirrors that shared conviction. The result is the compilation of 161 letters, presented here.

Coates was deeply interested in colonizing African Americans in West Africa, and the correspondence gathered here focuses on that aspect of his life. Though the correspondence with Roberts begins when Coates is middle-aged-forty years old-it is clear that he had been involved in various African Americans' reform organizations at least a decade earlier. Through the succeeding years, his writings reveal his development as a politically aware, economically astute, and deeply dedicated mediator of abolitionist ideas and personalities. His open letter to Frederick Douglass (June 27, 1850) is clear evidence of the nimbleness of his mind, and several of his letters are apologetically autobiographical, but the clearest statement of the subtlety of this thinking is his pamphlet on why and how cotton should be grown in Africa, published in 1858, when he was fifty years old. (See footnote 86).

Editing these documents that unfold Coates' story was a wonderful exercise in collaboration. With the generous support of the college, a team was created, consisting of the Curator of Special Collections, an independent scholar with expertise in Philadelphia Quakerism and abolitionism, and three students who had been trained in documentary editing through the Haverford History department's Seminar in Historical Evidence. Each team member brought different expertise, energy, and perspective, allowing a kind of synergy in the detective work of locating additional letters and information outside the Haverford Special Collections, at the Friends Historical Library at Swarthmore College, the Historical Society of Pennsylvania, the Library Company of Philadelphia, the Library of Congress, and the present-day Delaware Valley Quaker communities. In all this, the help and enthusiasm of Elisabeth Potts Brown, Diana Franzusoff-Peterson, and Joelle Bertolet of Haverford College Special Collections were invaluable. We also received wonderful support from Christopher Densmore of Friends Historical Library, Swarthmore College, from Phillip Lapsansky at the Library Company of Philadelphia, and from Osborn Cresson. Gary B. Nash and Thomas Hamm read portions of the manuscript, and steered us away from some of the more glaring errors. Peter Potter and Peter Ripley kept assuring us that an enthusiastic readership awaited the publication of this volume. Several other scholars, including Julie Winch and John Stauffer, read the manuscript at various stages and offered crucial criticisms. We hope that the result will excite other readers as it excited us.

The materials reproduced here are an introduction to a compelling story. Benjamin Coates was a man of many involvements-and many words-and there is a great deal more correspondence between him and his family and friends, but that is the subject of another volume. He was active in Philadelphia's Quaker business community, and he supported schools and charities-as did his cousin, Benjamin Horner Coates, with whom he is often confused. The letters in this volume, then, represent a narrow, but important segment of Coates' life, one that invites us to hope that other letters, still buried in private collections, will come to light. For example, we have found no correspondence between Coates and Martin Delany, Coates' contemporary who was the premier black proponent of relocating African Americans to West Africa. Coates was never shy about writing to anyone who shared his interests, or who might be persuaded to share them, and Delany's traveling companion on his 1859 trip to Africa in search of a resettlement site was Robert Campbell, who was Coates' correspondent over many years. Were there letters from Coates among the effects that were destroyed in the fire at Delany's home in Wilburforce, Ohio which also wiped out Delany's artifacts from his Africa trip? Are there letters from Delany to Coates still stored away in another attic? Are there additional exchanges between Campbell and Coates? Is there a rich colonization correspondence between Coates and others waiting to be brought forth? It is our hope that this volume will stimulate the search for more of Coates' correspondence with which to more fully understand his mind and his work, for much of what we see here is a teaser, tantalizing us to imagine what materials might yet be found.

Visiting Committees [all members served on these]: 1866-80 (In 1881 Report, Coates' name has been crossed out in pencil and replaced by “S. Allen.”

1862-64 Haverford College Board of Managers (trustees)

1863 Portrait painted by Thomas Sully; “a present to the Colonization Society”

Commmittee on Nomination of New Members: 1865

Sub-Com. on Appt. And Transportation of Teachers: 1866

1877 Publication Fund of the Historical Society of Pennsylvania: