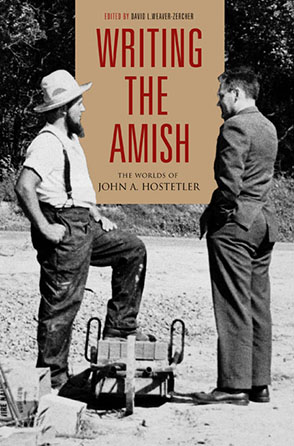 “Hostetler's own writings in the book provide explanation and insight into Amish culture, offering interesting and little-known insight into the Amish way of life.”—Lisa Kellar, Pittsburgh Magazine

From the early 1960s to the late 1980s, John A. Hostetler was the world’s premier scholar of Amish life. Hailed by his peers for his illuminating and sensitive portrayals of this often misunderstood religious sect, Hostetler successfully spanned the divide between popular and academic culture, thereby shaping perceptions of the Amish throughout American society. He was also outspoken in his views of the modern world and of the Amish world—views that continue to stir debate today.

Born into an Old Order Amish family in 1918, Hostetler came of age in an era when the Amish were largely dismissed as a quaint and declining culture, a curious survival with little relevance for contemporary American life. That perception changed during Hostetler’s career, for not only did the Amish survive during these decades, they demonstrated a stunning degree of cultural vitality—which Hostetler observed, analyzed, and interpreted for millions of interested readers.

Writing the Amish both recounts and assesses Hostetler’s Amish-related work. The first half of the book consists of four reflective essays—by Donald Kraybill, Simon Bronner, David Weaver-Zercher, and Hostetler himself—in which Hostetler is the primary subject. The second half reprints, in chronological order, fourteen key writings by Hostetler with commentaries and annotations by Weaver-Zercher.

Taken together, these writings, supplemented by a comprehensive bibliography of Hostetler’s publications, provide ready access to the Hostetler corpus and the tools by which to evaluate his work, his intellectual evolution, and his legacy as a scholar of Amish and American life. Moreover, by providing a window into the varied worlds of John A. Hostetler—his Amish boyhood, his Mennonite Church milieu, his educational pursuits, his scholarly career, and his vocation as a mediator and advocate for Amish life—this volume enhances the ongoing discussion of how ethnographic representation pertains to America’s most renowned folk culture, the Old Order Amish.

“Hostetler's own writings in the book provide explanation and insight into Amish culture, offering interesting and little-known insight into the Amish way of life.”—Lisa Kellar, Pittsburgh Magazine

“This text covers the subject well and is recommended for school and public libraries.”—Al Holliday, Pennsylvania Magazine

“This insightful and important book, which captures the life of a complex man, opens with a series of chapters by a daughter, colleagues and other scholars who have carefully followed the development of his career and influences.”—Thomas J. Meyer, Mennonite Quarterly Review

“The book brings into focus many facets of Hostetler’s lifework and relates them to one another in an effective and compelling survey.”—Steven D. Reschly, Pennsylvania Magazine of History and Biography

David L. Weaver-Zercher is Associate Professor of American Religious History at Messiah College. He is the author of The Amish in the American Imagination (2001).

John A. Hostetler (1918–2001) was Professor Emeritus of Anthropology and Sociology at Temple University, where he taught from 1965 to 1985. From 1986 to 1989 he served as director of the Young Center for the Study of Anabaptist and Pietist Groups at Elizabethtown College.

Part I: Perspectives on John A. Hostetler

2. The Redemptive Community: An Island of Sanity and Silence

3. Plain Folk and Folk Society: John A. Hostetler’s Legacy of the Little Community

4. An Uneasy Calling: John A. Hostetler and the Work of Cultural Mediation

6. Toward a New Interpretation of Sectarian Life in America (1951)

10. The Amish Use of Symbols and Their Function in Bounding the Community (1964)

14. Folk Medicine and Sympathy Healing Among the Amish (1976)

15. The Amish and the Law: A Religious Minority and Its Legal Encounters (1984)

18. Toward Responsible Growth and Stewardship of Lancaster County’s Landscape (1989)

The Life of John A. Hostetler: A Chronology

The Publications of John A. Hostetler: A Bibliography

Perspectives on John A. Hostetler

The four essays in Part I provide retrospective analyses of John A. Hostetler’s work as a scholar of Amish life. The first essay is autobiographical, written by Hostetler at the close of his scholarly career. The other three essays were written by active scholars specifically for this volume. Together they provide contextual assessments of Hostetler’s work, as well as interpretive frameworks for reading Hostetler’s writings in Part II of this volume.

Hostetler’s essay, “An Amish Beginning,” is a revision of a piece by the same title that appeared in American Scholar in 1992. After the original essay appeared, Hostetler began to assemble other materials for a book-length retrospective on his life. Most of those materials were additional autobiographical vignettes, the majority of which pertained to the first seventeen years of his life as an Amish boy, first in Pennsylvania and then in Iowa. Later, with the assistance of Susan Fisher Miller, these vignettes were adapted and incorporated into Hostetler’s original American Scholar essay, producing a considerably longer and more personal account of his “Amish beginning.” About two-thirds of the essay is now devoted to Hostetler’s first seventeen years, with most of the essay’s remainder devoted to his college education, his experiences as a World War II conscientious objector, and his graduate work at Pennsylvania State College and University. Readers looking for autobiographical reflections on Hostetler’s mature scholarship, his role as a mediator between the Amish and the larger public, and his work as an advocate for Amish people and causes, will find few of those reflections here. At the same time, they will be introduced to various elements of Hostetler’s early years that, according to him, shaped his commitments, his vocational choices, and his scholarship.

At its most basic level, “An Amish Beginning” constitutes Hostetler’s answer to a question he was frequently asked: How did the Amish-born Hostetler become a university professor? But the essay served another purpose, providing Hostetler with the opportunity to do once again what he did throughout his career: educate his readers about Amish life. In this latter respect, two revisions to Hostetler’s original “An Amish Beginning” essay are worth noting. First, the section describing his father’s excommunication from the Peachey Amish Church is now considerably longer. Whereas the original essay offered only one paragraph of explanation, this revised version goes into some detail about four “happenings” that eventually led to disciplinary action against his father, Joseph Hostetler. Second, the revised essay includes a new section on Amish courtship practices in which Hostetler recounts his own experience with “bundling,” a traditional courtship practice in which unmarried partners enjoy one another’s company in bed. Interestingly, these two additional sections address the two features of Amish life that, during Hostetler’s career, aroused the greatest degree of curiosity and, in some cases, disapprobation. It appears that, even at the end of his life, Hostetler was seeking to shape popular perceptions of these peculiar and often misunderstood aspects of Amish life.

The second essay in this section comes from Donald B. Kraybill, one of Hostetler’s graduate students and himself a leading scholar of Amish life. Kraybill’s personal retrospective offers insight into Hostetler’s humble and quiet personality, which Kraybill connects to Hostetler’s Amish upbringing and, just as significantly, to his effectiveness as a researcher in Amish communities. In addition to explaining the significance of Hostetler’s scholarship, Kraybill outlines the sweeping transformations underway in both mainstream American society and Amish society during the decades Hostetler worked and wrote. Much of Hostetler’s scholarship, Kraybill avers, is simply good ethnographic research, which Hostetler effectively tailored to various audiences. Still, says Kraybill, even though most of Hostetler’s analytical categories were derivative, he nonetheless offered insights into Amish culture that were profoundly original and, moreover, unavailable to persons whose fieldwork methods were less sensitive to the nuances of Amish life.

In the third essay of Part I, Simon J. Bronner examines Hostetler’s scholarship through the lenses of Hostetler’s academic disciplines. Although Hostetler earned a Ph.D. in rural sociology, he would later range into the fields of folklife studies and, increasingly, anthropology, where he felt freer to produce values-conscious scholarship. Bronner pays particular attention to Hostetler’s use of “folk society” as a way to articulate the distinctiveness of Amish life vis-à-vis mainstream American culture. As Bronner notes, Hostetler’s presentation of Amish life is as much about middle-class America as it is about the Amish, and his writing about the Amish afforded him opportunities to critique certain aspects of mainstream American life. Bronner contextualizes Hostetler’s work in three interconnected ways—by tracking contemporaneous currents in Hostetler’s academic disciplines; by noting the emergence of a new, professional class in mid-twentieth-century America; and by limning the connections between Hostetler’s sociological analyses and his worldview—and concludes his consideration of Hostetler’s work by citing his legacy for the study of Anabaptist and communitarian groups. This legacy, Bronner suggests, was one of opening up the field of Anabaptist studies to interdisciplinary inquiry, a process that invited close examination of—and challenges to—his work as the field matured.

The final essay of Part I, by David L. Weaver-Zercher, focuses on Hostetler’s religious background and the ongoing challenges he faced as a scholar, mediator, and advocate of Amish life. Weaver-Zercher recounts Hostetler’s Amish boyhood, his decision to forgo baptism in the Amish church, his mid-century Mennonite Church context, his graduate education, and various aspects of his career as a man “betwixt and between” Amish culture and mainstream American life. Drawing on Hostetler’s use of calling to explain his life trajectory, Weaver-Zercher argues that some aspects of Hostetler’s work were disconcerting to him, an unease that was unavoidable given the complexity of his task, the multiplicity of his constituencies, and his own Amish sensibilities. At the same time, Hostetler’s vocational, even spiritual, understanding of his Amish-related work provided him with important resources and personal meaning as he pursued his various tasks.

There are other lenses through which to examine Hostetler’s Amish-related work. Even so, these four essays give careful attention to the most important elements of Hostetler’s endeavor to write the Amish: his historical context, including his personal history; his chosen vocation as a scholar-mediator; his use of “folk” and “community” to explain Amish life; and his unparalleled advancement of the field of Amish studies. In that sense, these four essays provide vital perspectives for assessing Hostetler’s work and its continuing significance for the study of Amish life.

Hoofbeats of Humility in a Postmodern World