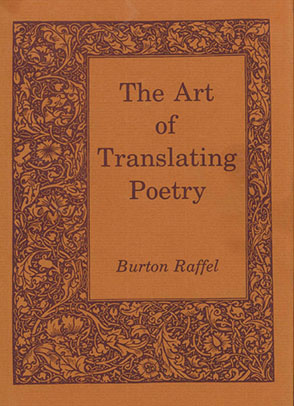 Languages discussed include Indonesian, Japanese, Chinese, Old and Middle English, French, German, Spanish, Italian, Persian, Russian, Latin, and Greek. The book argues, inter alia, that literal translation is impossible; that no translation can fully create the original but that good literary translation can create a usable approximation; that translation is secondary not only to the original work being translated but also to the linguistic (and literary) nature of the language being translated into; that the literary translator's primary responsibility is to the work he is translating; that there is nothing ever definitive about any translation; that the poetry translator must be a poet and poems should not be translated into prose; and that there must be a subjective identification between translator and translated work.

Burton Raffel is Distinguished Professor of English at the University of Southwestern Louisiana and author of many books, including Artists All (Penn State, 1991) and The Art of Translating Prose (Penn State, 1994). He is the translator of Rabelais's Gargantua and Pantagruel (1990), winner of the 1991 French-American Foundation Translation Prize; Balzac's Père Goriot (1994), and a forthcoming new version of Cervantes's Don Quijote.