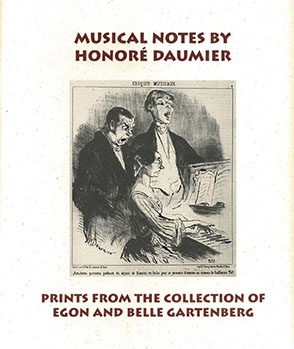 Hector Berlioz, Franz Liszt, Gioacchino Rossini, and Niccolò Paganini are among the "greats" lampooned in the lithographs in Musical Notes by Honoré Daumier. Other prints offer satirical glimpses into the music making of everyday Parisians—from squawking clarinets to flirtatious piano teachers and straining tenors. In these lithographs, as in most of the prints Daumier produced during his long career, he discloses the foibles and follies of a society facing rapid changes in its cultural norms.

Joyce Henri Robinson is Curator at the Palmer Museum of Art and Affiliate Associate Professor of Art History at The Pennsylvania State University.