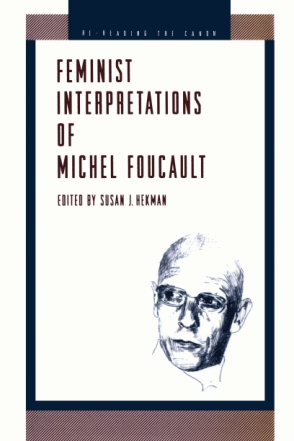 “In this challenging collection, contributors evaluate Foucault's deconstruction of the Enlightenment paradigm and its universalist, masculinist tendencies, while searching for ideas and methods that might strengthen and enhance feminist theories.”Choice

This volume presents an exploration of the intersection between the work of Michel Foucault and feminist theory, focusing on Foucault's theories of sex/body, identity/subject, and power/politics.

Like the other books in this series, this volume seeks to bring a feminist perspective to bear on the interpretation of a major figure in the philosophical canon. In the case of Michel Foucault, however, this aim is somewhat ironic because Foucault sees his work as disrupting that very canon. Since feminists see their work as similarly disruptive, Foucault and feminism would seem to find much common ground, but, as the contributors to this collection reveal, the matter is not so simple. Foucault, like many feminists, is centrally concerned with questions related to sexuality and the body. This concern has led both Foucault and feminists to challenge the founding concept of the modernist philosophical canon: the disembodied transcendental subject. For both Foucault and feminists, this subject must be deconstructed and a new concept of identity articulated. The exciting possibilities of a Foucaultian approach to issues of the subject and identity, especially as they relate to sex and the body, are detailed in several of the essays collected here.

Despite these possibilities, however, Foucault's approach has raised serious questions about an equally crucial area of feminist thought-politics. Some feminist critics of Foucault have argued that his deconstruction of the concept "woman" also deconstructs the possibility of a feminist politics. Several essays explore the implications of this deconstruction for feminist politics and suggest that a Foucaultian feminist politics is not viable. Overall, this collection illustrates the range of interest Foucault's thought has generated among feminist thinkers and both the advantages and liabilities of his approach for the development of feminist theory and politics.

“In this challenging collection, contributors evaluate Foucault's deconstruction of the Enlightenment paradigm and its universalist, masculinist tendencies, while searching for ideas and methods that might strengthen and enhance feminist theories.”Choice

“The articles collected in this volume give a good sense of the way in which Foucault's work has been used and interrogated within a feminist agenda. . . . It is a representative slice through the debates, and is an important contribution to a series—Re-reading the Canon—which thus far is proving to be an invaluable collection of feminist work that is both politically and intellectually engaged.”—Vikki Bell, International Studies in Philosophy

Susan J. Hekman is Professor of Political Science and Associate Dean of Graduate Programs, College of Liberal Arts, at the University of Texas at Arlington. She is the author of, most recently, Moral Voices, Moral Selves: Carol Gilligan and Feminist Moral Theory (Penn State, 1995) and Gender and Knowledge: Elements of a Postmodern Feminism (1990).

2. Identity and the Liberal Polity

3. Identity Politics—the Personal and the Political

4. A New Politics of Identity