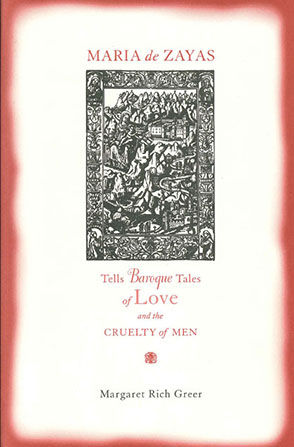 “An excellent synthesis of all that has been done on Zayas up to the present as well as a major step beyond those works in both its theoretical consistency and its engaging readings of the stories.”—William Blue, University of Kansas

María de Zayas y Sotomayor (1590–1650?) published two collections of novellas, Novelas amorosas y exemplares (1637) and Desengaños amorosos (1647), which were immensely popular in her day. During the nineteenth and early twentieth centuries, Victorian and bourgeois sensibilities exiled her “scandalous” works to the outer fringes of serious literature. Over the last two decades, however, she has gained an enthusiastic and ever-expanding readership, drawing intense critical attention and achieving canonical status as a major figure of the Spanish Golden Age. In this first comprehensive study of Zayas’s prose, Margaret R. Greer explores the relationship between narration and desire, analyzing both the “desire for readers” displayed by Zayas in her Prologue and the sexual desire that drives the telling within the novellas themselves. Greer examines Zayas’s narrative strategies through the twin lenses of feminist and psychoanalytic theory. She devotes close attention to the weight of Renaissance literary traditions and the role of Zayas’s own cultural context in shaping her work. She discusses Zayas’s biography and the reception of her publications; her advocacy of women’s rights; her conflictive loyalty to an aristocratic, patriarchal order; her crafting of feminine tales of desire; and her erasure of the frontiers between the natural and supernatural, indeed, between love and death itself. In so doing, Greer offers an expansive analysis of this recently rediscovered Golden Age writer.

“An excellent synthesis of all that has been done on Zayas up to the present as well as a major step beyond those works in both its theoretical consistency and its engaging readings of the stories.”—William Blue, University of Kansas

“Where the application of psychoanalytic categories to seventeenth-century texts might, to some, seem methodologically questionable, Maria de Zayas Tells Baroque Tales of Love and the Cruelty of Men stands as an extraordinarily productive instance of this practice. Our understanding of the cultural dimensions of the texts and of their paradoxical nature is immensely enriched. Impressive in its lucid weaving together of twentieth-century and early modern definitions of the psyche, Baroque aesthetics, as well as Counter Reformation ideology, the study is a most valuable addition to the growing bibliography of Zayas. To all those interested in this author, and, more generally, in questions of subject and gender in Tridentine Spain, it will prove an inspiring source of reflection.”—Ariandna Garcia-Bryce, Renaissance Quarterly

“Greer brings a welcome psychoanalytical perspective to Zayas’ novellas. Focusing on the various meaning of ‘desire,’ she investigates both the author’s need to win over readers, and the role that sexual desire plays in structuring the fiction.”—Anne J. Cruz, Bulletin of Spanish Studies