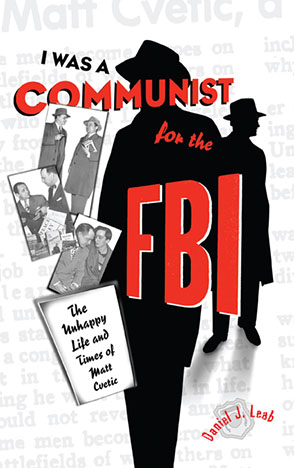 “Based on exhaustive and creative research, this book is balanced, smart, and well written. The book-length Matt Cvetic that Leab paints is no less despicable than the miniatures to which we have become accustomed, but he is much more human and, therefore, more comprehensible than in any previous treatment.”—Steve Rosswurm, Lake Forest State College

Who is Matt Cvetic? Hero? Scoundrel? Mole? The man who loosely provided the inspiration for the B-Grade cult movie I Was a Communist for the FBI had a life that was marred by alcoholism, damaged expectations, and greed.

Cvetic, at the request of the FBI, joined a Pittsburgh branch of the CPUSA in 1943. He became one of many plants in the Party during that decade and gained the nickname "Pennsylvania’s most significant mole." However, because of his erratic behavior, the FBI fired him in 1950, at which time he surfaced and suddenly became a celebrity through his testimony before the HUAC hearing. Journalist Richard Rovere described Cvetic as a "kept witness," a term that fits those who "made a business of being witnesses," thereby "befouling due process."

Cvetic was the subject of a multipart series in the Saturday Evening Post. The articles bordered on fiction, but they gave Cvetic the national exposure he needed to secure a screen deal. Warner Brothers bought the story, made the movie, and enhanced Cvetic’s celebrity as pop icon. In the mid–1950s, Cvetic was discredited as a witness by the courts. His career ended and he found a new niche on the Radical Right, yet he died in 1962 after years of fighting to uphold his image with the media. Today Cvetic’s image is dimly remembered as he continues to fight "the Red Menace" on late-night television.

Leab juxtaposes Cvetic’s real life with his reel life. He chronicles his fall from grace, yet admits that Cvetic’s life offers fascinating and useful insights into the creation, merchandising, and distribution of a reckless professional witness. Leab also writes about Cvetic’s life prior to his involvement with the FBI, his glory days, and shows that there is much to be learned from the story of an "anti-Communist icon."

“Based on exhaustive and creative research, this book is balanced, smart, and well written. The book-length Matt Cvetic that Leab paints is no less despicable than the miniatures to which we have become accustomed, but he is much more human and, therefore, more comprehensible than in any previous treatment.”—Steve Rosswurm, Lake Forest State College

“A fascinating example of the way in which heroes were made during America’s scoundrel time. In this well-constructed book, Daniel Leab offers an excellent character study of Matt Cvetic and a useful case study of the Red Scare–Cold War era.”—Phillip Jenkins, Penn State University, Author of The Cold War at Home

“Based on numerous interviews and a thorough scouring of (still heavily censored) FBI files and the documentary record, this is a definitive account of Cvetic that will be of considerable interest to specialists.”—R.J. Goldstein, CHOICE

“A well-researched and useful contribution to the still-growing literature on anti-communism and the Cold War.”—Robert Griffith, Journal of American History

“In this nicely researched study, Daniel Leab tells us all we need to know about him. Whether Cvetic merits a biography is open to question, but this study is appropriately short and much of it’s freshness lies in it’s analysis of the myth constructed around Cvetic by the media and, indeed, by Cvetic himself, his stories becoming ever more wilder as he struggles to maintain his celebrity status.”—M. J. Heale, Journal of American Studies

“If this book were not so well documented, I would have sworn that it was a beautifully constructed work of fiction.”—Charisse T. M. Coston, Criminal Justice Review

“A compelling account of the grubby life behind the gleaming mask of the Communist-hunter Matt Cvetic. The maze of hysteria, opportunism, and deceit that made up Cold War America is freshly illuminated by Leab’s study of Cvetic’s career. This book stands as an eloquent testimony of the depths to which America sank in the 1950s and is a timely reminder of the dangers of the media culture of celebrity.”—Nick Cull, University of Leicester

“Meticulously researched, scrupulously fair-minded, and consistently enlightening, Dan Leab’s study of the strange and fascinating career of Matt Cvetic—Communist for the FBI and professional anti-Communist thereafter-is an invaluable contribution to American history. Drawing on newly available research materials and his own unmatched expertise in the culture of Cold War America, Leab paints a vivid portrait of a troubled man within the context of his no less troubling times.”—Thomas Doherty, Brandeis University

Daniel Leab is Professor of History at Seton Hall University. His previous books include The Labor History Reader (1987), George Orwell: An Exhibition at the Grolier Club (1996) and, with Philip Mason, Labor History Archives in the United States: A Guide for Researching and Teaching (1992).

The CIA and the Filming of Animal Farm