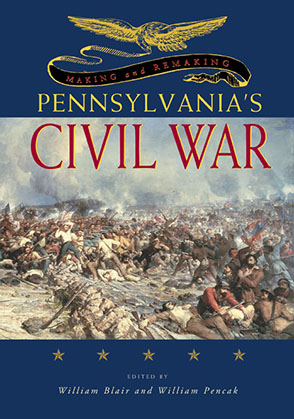 Winner of the 2002 Philip S. Klein Book Prize for best book that illuminates the history of Pennsylvania from the Pennsylvania Historical Association

For many people, Pennsylvania's contribution to the Civil War goes little beyond the battle of Gettysburg. The North in general has received far less attention than the Confederacy in the historiography of the Civil War—a weakness in the literature that this book will help address. The essays in this volume reconsider the impact of the Civil War on Pennsylvania and the way its memory remains alive even today.

Making and Remaking Pennsylvania's Civil War contains a wealth of new information about Pennsylvania during the war years. For instance, perhaps as many as 2,000 Pennsylvanians defected to the Confederacy to fight for the Southern cause. And during the advance of Lee's army in 1863, residents of the Gettysburg area gained a reputation throughout North and South as a stingy people who wanted to make money from the war rather than sacrifice for the Union. But the state displayed loyalty as well and commitment to the cause of freedom. Pittsburgh served as the site for one of the first public monuments in the country dedicated to African Americans. Women of the Commonwealth also contributed mightily through organizing sanitary fairs or helping in ways that belied their roles as keepers of the domestic world. And readers will learn from an African American soldier's letters how blacks helped win their own liberation.

As a whole, the ten essays contained in Making and Remaking Pennsylvania's Civil War include courage on the battlefield but reflect the current trends to understand the motivations of soldiers and the impact of war on civilians, rather than focusing solely on battles or leadership. The essays also employ interdisciplinary techniques, as well as raise gender and racial questions. They incorporate a more expansive time frame than the four years of the conflict, by looking at not only the making of the war—but also its remaking—or how a public revisits the past to suit contemporary needs.

“This work fills a void in the historiography of the state of Pennsylvania in the Civil War. The essays are superbly researched and nicely written. Many very nicely reproduced illustrations add to the attractiveness of the book. You don’t have to be a Pennsylvanian to find this book of interest. I can highly recommend this work to fill a void in the history of the country’s greatest conflict.”—Michael A. Cavanaugh, Civil War News

William A. Blair is Director of the Civil War Era Center and Associate Professor of History at Penn State and Editor of Civil War History. His previous books are Virginia‚Äôs Private War: Feeding Body and Soul in the Confederacy, 1861-1865 (Oxford, 1998) and A Politician Goes to War: The Civil War Letter sof John White Geary (Penn State, 1995).William A. Pencak is Professor History at Penn State and Editor of Pennsylvania History: A Journal of Mid-Atlantic Studies and Explorations in Early American Culture: An Annual Supplement to Pennsylvania History published for the McNeil Center for Early American Studies.

Three Years in the “Bloody Eleventh”

The Campaigns of a Pennsylvania Reserves Regiment

Edited by William A. Pencak