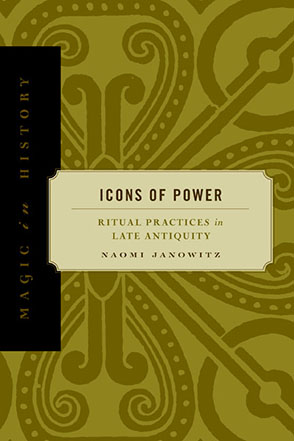 “Icons of Power will interest anyone who wants to understand the role that ritual played in the late antique world. Crossing sectarian boundaries and examining texts from Jewish, Christian, and pagan sources, Janowitz succeeds in outlining the hidden syntax underlying ritual practices in a wide variety of religious communities.”—Gregory Shaw, Stonehill College

Winner of a 2003 Choice Award for an Outstanding Academic Title

In the waning years of the Roman Empire, Jews, Christians, and pagans alike used rituals to bridge the gap between the human and the divine. Depending on one’s point of view, however, such rituals could be labeled negatively as "magic" or positively as "theurgy." This has led to numerous problems of interpretation, including marginalizing certain ritual practices as magic or occult while privileging others as genuine or orthodox. In Icons of Power, Naomi Janowitz sifts through the polemics to make sense of the daunting mosaic of religious belief and practice in Late Antiquity.

From rabbis who ascended to heavenly places, to sorcerers seeking to harm enemies with spells, to alchemists working metals to purify the soul, Janowitz reveals how ritual practitioners held common assumptions about why their rituals worked and about how to perform those rituals. Indeed, such assumptions were so much a part of the inherited mentality of the age that they were, for the most part, never explained—and this is precisely what Janowitz accomplishes in Icons of Power. By shifting the discussion out of the rhetoric of "magic" or "mysticism" and describing the mechanisms of ritual with semiotic terms, she moves us beyond the value-laden terminology of ancient polemicists and modern scholars so that we can better see how these rituals worked and how they affected the social identities of their followers.

Janowitz recovers a lost world of religious expression that has been clouded by misinterpretation for many centuries. In the process, Icons of Power makes an important contribution to our understanding of society in Late Antiquity.

“Icons of Power will interest anyone who wants to understand the role that ritual played in the late antique world. Crossing sectarian boundaries and examining texts from Jewish, Christian, and pagan sources, Janowitz succeeds in outlining the hidden syntax underlying ritual practices in a wide variety of religious communities.”—Gregory Shaw, Stonehill College

“Exploring the permeable borders between esoteric Jewish practices and rabbinic Judaism and setting those Jewish practices alongside Christian and pagan procedures, [Janowitz] illuminates a shared discourse of similar concerns and competing strategies. . . . Beyond her careful elucidation of relatively obscure texts, this study should appeal broadly to theorists of ritual. . . . Monographs on this subject suitable for undergraduate courses are rare; the theoretical sophistication of this book only aids in its utility.”—G. Spinner, Choice

“This book is a significant contribution to our understanding of late antique religion and ritual, as it considers some of the common ritual elements of late antique Judaism, early Christianity, and Greco-Roman religions.”—R. H. Cline, The Historian

Naomi Janowitz is Associate Professor of Religious Studies at the University of California at Davis. She is the author of The Poetics of Ascent: Theories of Language in a Rabbinic Ascent Text (1989).