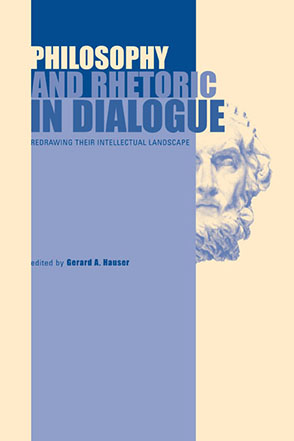 To commemorate the fortieth year of publication, current series editor Gerard Hauser assembled a volume of the journal’s most noteworthy articles, beginning with Henry Johnstone’s gem of an essay underscoring the essential relationship between the art of rhetoric and philosophy. Donald Verene elaborates that initial thesis and suggests that rhetoric and philosophy are not distinct entities in conversation, but instead that rhetoric provides a forum in which philosophy can exist. Jean Goodwin looks at the theory in terms of a teacher/student relationship, and Barbara Biesecker looks at how governments in the war on terror employ rhetoric to manipulate the social consciousness. A concluding article by Carroll Arnold casts rhetoric as a dramatic device essential to establishing personal sovereignty. During its forty years, Hauser writes, the journal “radically altered the relationship between philosophy and rhetoric from irreconcilable antagonists to interlocutors in a shared inquiry into the constitutive powers of discourse.” This series of essays brilliantly traces the arc of that accomplishment.

Gerard A. Hauser is Professor of Communications at the University of Colorado at Boulder.

1. Philosophy and Rhetoric: An Abbreviated History of an Evolving Identity

2. The Philosophical Basis of Rhetoric

5. Kinship: The Relationship Between Johnstone’s Ideas About Philosophical Argument And The Pragma-Dialectical Theory Of Argumentation

8. Rhetorical Criticism and the Challenges of Bilateral Argument

9. The Faith and Struggle of Beginning (with) Words: On the Turn Between Reconciliation and Recognition

10. No Time for Mourning: The Rhetorical Production of the Melancholic Citizen-Subject in the War on Terror