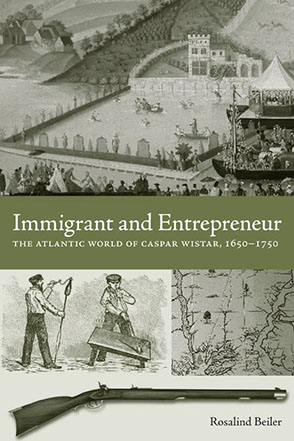 “Immigrant and Entrepreneur is a welcome addition to colonial and Atlantic history. It is impressively researched and provides an intriguing account of the process by which Caspar Wüstar, a forester from the Palatinate, became Caspar Wistar, one of Pennsylvania’s wealthiest merchants and manufacturers.”—Daniel B. Thorp, Journal of American History

Immigrant and Entrepreneur examines the life of German immigrant and successful businessman Caspar Wistar. Wistar arrived in Philadelphia in 1717 with nearly no money; at the time of his death in 1752, his wealth outstripped that of the contemporary elite more than threefold. Through this in-depth look at an immigrant’s path to achieving the American Dream, Beiler reevaluates the modern understanding of the entrepreneurial ideal and the immigrant experience in the colonial era.

The book follows Wistar’s life from his family’s German influences to the potential reasons behind his desire to emigrate and the networks he used to establish himself as a wealthy entrepreneur once he reached his adopted home. Beiler draws from Wistar’s compelling story to examine the greater processes at work in the Atlantic world of the eighteenth century. Wistar’s success exemplifies how European influence, patterns of adaptation, and an innovative cultivation of networks helped integrate immigrants into colonial America and the Atlantic world.

“Immigrant and Entrepreneur is a welcome addition to colonial and Atlantic history. It is impressively researched and provides an intriguing account of the process by which Caspar Wüstar, a forester from the Palatinate, became Caspar Wistar, one of Pennsylvania’s wealthiest merchants and manufacturers.”—Daniel B. Thorp, Journal of American History

“The author does a superb job as a detective in tracking down the complicated web of Wistar’s business and personal relationships. This is one of the most fascinating aspects of this monograph. . . . Perhaps this work should be mandatory reading for MBA students. . . . With Immigrant and Entrepreneur, Rosalind Beiler has provided an engrossing account of a man who had a significant influence on the development of the Pennsylvania economy and society.”—Simone A. Wegge, Pennsylvania Magazine of History and Biography

“This book has been much anticipated by scholars familiar with the author’s work and this field. It will be the prime exhibit for the growing community of Atlantic historians teaching early American or Atlantic history who are anxious to broaden the context of colonial America beyond the British and African connections.”—Ian Steele, University of Western Ontario

Rosalind Beiler is Associate Professor of History at the University of Central Florida.

1. Men in the Middle: Foresters and Hunters in the Early Modern Palatinate

2. Individual Pursuits Versus the Common Good: The Constraints of Village Life in Waldhilsbach

3. Contested Identities: Religious Affiliation and Diversity in the Palatinate

4. Leaving Home: The Decision to Emigrate