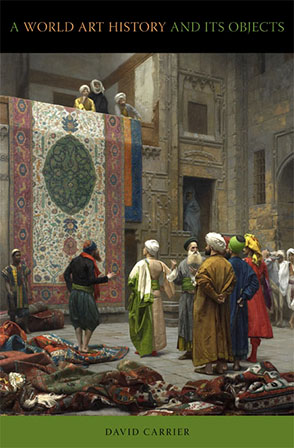 Is writing a world art history possible? Does the history of art as such even exist outside the Western tradition? Is it possible to consider the history of art in a way that is not fundamentally Eurocentric? In this highly readable and provocative book, David Carrier, a philosopher and art historian, does not attempt to write a world art history himself. Rather, he asks the question of how an art history of all cultures could be written—or whether it is even possible to do so. He also engages the political and moral issues raised by the idea of a multicultural art history. Focusing on a consideration of intersecting artistic traditions, Carrier negotiates the way meaning and understanding shift or are altered when a visual object from one culture, for example, is inserted into the visual tradition of another culture. A World Art History and Its Objects proposes the use of temporal narrative as a way to begin to understand a multicultural art history.

David Carrier is Champney Family Professor at Case Western Reserve University and the Cleveland Institute of Art. He is the author of the Penn State titles The Aesthetics of Comics (2000), High Art: Charles Baudelaire and the Origins of Modernist Painting (1996), The Aesthete in the City (1994), Poussin’s Paintings: A Study in Art-Historical Methodology (1993), and Principles of Art History Writing (1990).

1. Works of Art and Art-Historical Narratives

3. Why Monoculturalism Is Not the Whole Story

4. What Happens when Art-Making Traditions Intersect

5. Charts and Works of Art

6. The Importance of an Aesthetic

8. How Exotic Can Exotic Art Be?

10. Mutual Respect as an Ethical Ideal

The deepest work in the philosophy of art is based on an engagement with art itself, rather than with what philosophers have written.

It is surprising that there is not, as yet, an adequate world art history. For more than a century, European and American museums have collected art from all cultures. Many specialists have discussed these artifacts. But until we can place the arts of China, India, and Islam in relation to Europe’s, our picture of world visual culture will be merely fragmentary. There are world histories—J. M. Roberts’s A Short History of the World and Michael Cook’s A Brief History of the Human Race, to cite recent examples. S. A. M. Adshead’s China in World History centers world history on China. And Randall Collins has published a world history of philosophy. But art history lacks comparable books. Although there are excellent surveys of long periods of individual traditions, there is no full account of the interrelationships of visual cultures. There is a very large, extremely contentious literature discussing imperialism, but not yet any comprehensive discussion of its effects on visual art.

Imagine how academics will look back fifty years hence at present-day art history. They will be fascinated by Tim Clark’s Marxism, Keith Moxey’s Foucauldian analysis of interpretation, Griselda Pollock’s feminism, and Mieke Bal’s and Norman Bryson’s semiotics—novel interpretative strategies that changed the discipline. And they will note how quickly art historians discussed arte povere, Pop Art, Minimalism, and other more recent developments. But they will also observe that Clark, Moxey, Pollock, Bal, and Bryson studied mostly the European canon. Art from outside Europe remains marginalized. A similar point could be made about aesthetics. The mainline literature deals almost exclusively with Western themes. Tapati Guha-Thakurta’s writing on Indian art, Wu Hung’s and Craig Clunas’s discussions of the art of China, and Oleg Grabar’s publications about Islamic art make use of novel Western interpretative strategies. But there is, as yet, very little crossover of their concerns into the study of European art. Art writers concerned with China, India, or Islam frequently deal with European painting and sculpture. But only rarely do scholars of Western art discuss painting or sculpture from outside Europe. “Insofar as the academic discourse of history . . . is concerned,” Dipesh Chakrabarty writes, “‘Europe’ remains the sovereign, theoretical subject of all histories, including the ones we call ‘Indian.’ . . . [All] other histories tend to become variations on a master narrative that could be called ‘the history of Europe.’” And then Chakrabarty asks: “Why cannot we . . . return the gaze?”

The legitimate pressures in American universities for a multicultural curriculum will create demand for a world art history. Chinese Americans, Indian Americans, Korean Americans, and Muslims in America are likely to join African Americans in demanding that their visual traditions be taught in survey classes. And so it is not too optimistic to think that in 2057 our discipline will look very different. We can make an analogy to moral philosophy, which, until relatively recently, tended to serve parochial religious needs. “Belief in God, or in many gods, prevented the free development of moral reasoning. Disbelief in God, openly admitted by a majority, is a very recent event, not yet completed. Because this event is so recent, Non-Religious Ethics is at a very early stage. . . . Since we cannot know how Ethics will develop, it is not irrational to have high hopes.” Similarly, monoculturalism has inhibited the development of art history. But because only recently has the desire for multicultural narratives become important, it is not irrational to have high hopes. Not until art writers abandon the Christian European tradition can we properly understand art from cultures with other religions. In art history, as in ethics, atheism can be liberating.

With the noteworthy exceptions of James Elkins, David Summers, John Onians, and Rudolf Wittkower, few recent art historians are concerned with a world art history. In the past, Europeans were overconfident about the universality of their ways of thinking. Nowadays, in response, we have become very suspicious of large-scale historical explanations. “Only God knows world history.” Jean-François Lyotard attracted sympathy when he “railed against what he calls ‘Grand Narratives’ or the ideology of ‘Total Theory’, particularly the Enlightenment accounts of a universal human nature and historical progress.” When Hegel lectured on the art of Egypt, Greece, and Italy, the accessible literature was small. Nowadays, however, it is impossible to master the writings devoted to even one visual culture. A Poussin scholar is expected to read most of the large literature. But no one could master the commentaries devoted to art in China, Europe, India, and the Islamic world. Philosophers and cultural historians who write about the politics of multiculturalism do not usually also seriously study art history. Introductory texts surveying world art history are creations of committees, for no one knows enough to write a full account.

As yet, it is too early to write a full visual history of all cultures. A full narrative of art covering China, Europe, India, and the Islamic world would be a very fat book. This slim volume is, rather, a prolegomena. Is a world history of art possible? What political impact could it have? And what structure? Those questions, at least, I try to answer. The word “prolegomena” is intended to allude to Immanuel Kant’s Prolegomena to Any Future Metaphysics. “My purpose is to persuade all those who think metaphysics worth studying that it is absolutely necessary to pause a moment and, regarding all that has been done as though undone, to propose first the preliminary question, ‘Whether such a thing as metaphysics be even possible at all?’” I ask whether a world art history is possible. Leaving aside the obvious vanity in invoking Kant’s name, my art-historical concerns and goals are very different from his. Where he, after explaining the importance of this project and sketching its boundaries, went on to work out his metaphysics in comprehensive detail, I call upon future scholars to develop a world art history. And whereas Kant went on to develop a constructive metaphysics, my analysis poses serious skeptical questions about the possibility of a world art history. I do that by sketching a genealogy, “a narrative that tries to explain a cultural phenomenon by describing a way in which it came about, or could have come about, or might be imagined to have come about.” “Every man and nation needs a certain knowledge of the past, whether it be through monumental, antiquarian, or critical history,” Nietzsche wrote, “according to his objects, powers, and necessities.” Nowadays no historian can legitimately avoid dealing with Nietzschean skepticism.

When I circulated this manuscript and lectured on the material, I discovered how controversial its claims were. A totalizing world history, it was argued, is an entirely European concern; thanks to identity politics, it was said, we should recognize that such a history is impossible to write. The literature certainly makes me aware of these concerns. And I am very conscious that there will be errors in this wide-ranging analysis. But boldness is called for if academics are to respond to the political struggles that threaten to destroy the very possibility of international cooperation.

The Aesthetics of Comics