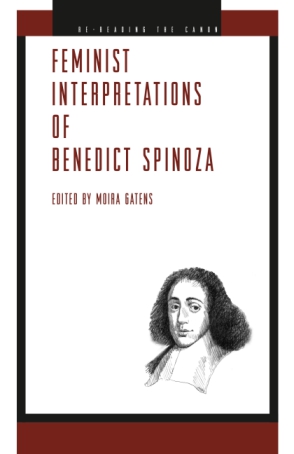 “This volume makes a significant contribution, both to Spinoza studies and to feminist theory. This stimulating collection of essays offers readers in both fields some provocative, and sometimes controversial, new interpretations of the classic rationalist philosopher.”—Michael Rosenthal, University of Washington

This volume brings together international scholars working at the intersection of Spinoza studies and critical and feminist philosophy. It is the first book-length study dedicated to the re-reading of Spinoza’s ethical and theologico-political works from a feminist perspective. The twelve outstanding chapters range over the entire field of Spinoza’s writings—metaphysical, political, theological, ethical, and psychological—drawing out the ways in which his philosophy presents a rich resource for the reconceptualization of friendship, sexuality, politics, and ethics in contemporary life.

The clear and accessible Introduction offers a historical sketch of Spinoza’s life and intellectual context and indicates how Spinoza’s philosophy might be seen as a rich cultural resource today. Topics treated here include the mind-body problem and its relation to the sex-gender distinction; relational autonomy; the nature of love and friendship; sexuality and normative morality; free will and determinism and their relation to Christian theology; imagination and recognition between the sexes; emotion and the body; and power, imagination, and political sovereignty. The essays engage in a rich and challenging conversation that opens new paths for feminist research.

“This volume makes a significant contribution, both to Spinoza studies and to feminist theory. This stimulating collection of essays offers readers in both fields some provocative, and sometimes controversial, new interpretations of the classic rationalist philosopher.”—Michael Rosenthal, University of Washington

“This volume is an excellent contribution to Spinoza scholarship. Spinoza scholars will find that this book offers new angles from which to think through questions about Spinoza’s metaphysics, ethics, and politics. Feminist researchers will find it provides additional, perhaps surprising resources for considering a range of issues, such as autonomy, individuality, political organization, ethics, and sexuality and gender.”—Deborah Boyle, Philosophy in Review

Moira Gatens is Professor of Philosophy at the University of Sydney in Australia. Among her previous books is Collective Imaginings: Spinoza, Past and Present (1999).

2. Dominance and Difference: A Spinozistic Alternative to the Distinction Between “Sex” and “Gender”

3. Autonomy and the Relational Individual: Spinoza and Feminism

4. Spinoza on the Pathos of Idolatrous Love and the Hilarity of True Love

6. Reason, Sexuality, and the Self in Spinoza

7. What Spinoza Can Teach Us About Embodying and Naturalizing Ethics

8. Adam and the Serpent: Everyman and the Imagination

9. The Envelope: A Reading of Spinoza’s Ethics, “Of God”

11. The Politics of the Imagination

12. Law and Sovereignty in Spinoza’s Politics

This new series, Re-reading the Canon, is designed to foster this process of reevaluation. Each volume will offer feminist analyses of the theories of a selected philosopher. Since feminist philosophy is not monolithic in method or content, the essays are also selected to illustrate the variety of perspectives within feminist criticism and highlight some of the controversies within feminist scholarship.

In this series, feminist lenses will be focused on the canonical texts of Western philosophy, both those authors who have been part of the traditional canon, and those philosophers whose writings have more recently gained attention within the philosophical community. A glance at the list of volumes in the series will reveal an immediate gender bias of the canon: Arendt, Aristotle, Beauvoir, Derrida, Descartes, Foucault, Hegel, Hume, Kant, Locke, Marx, Mill, Nietzsche, Plato, Rousseau, Wittgenstein, Wollstonecraft. There are all too few women included, and those few who do appear have been added only recently. In creating this series, it is not my intention to rectify the current canon of philosophical thought. What is and is not included within the canon during a particular historical period is a result of many factors. Although no canonization of texts will include all philosophers, no canonization of texts that excludes all but a few women can offer an accurate representation of the history of the discipline, as women have been philosophers since the ancient period.