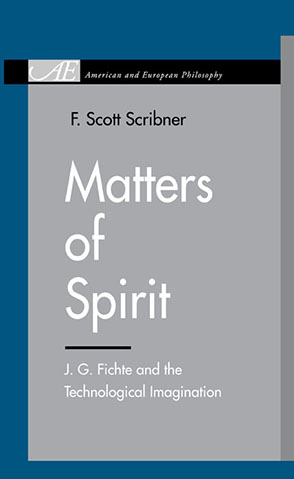 “In recent years our appreciation of the post-Kantian legacy has continued to evolve, and the standard account of thinkers like Fichte and Schelling has been found wanting. Scribner’s text is a very important addition to the Fichte renaissance and a fine work of thinking in its own right.”—Jason M. Wirth, Seattle University

This book offers a radically new interpretation of the entire philosophy of J. G. Fichte by showing the impact of nineteenth-century psychological techniques and technologies on the formation of his theory of the imagination—the very centerpiece of his philosophical system. By situating Fichte’s philosophy within the context of nineteenth-century German science and culture, the book establishes a new genealogy, one that shows the extent to which German idealism’s transcendental account of the social remains dependent upon the scientific origins of psychoanalysis in the material techniques of Mesmerism. The book makes it clear that the rational, transcendental account of spirit, imagination, and the social has its source in the psychological phenomena of affective rapport. Specifically, the imagination undergoes a double displacement in which it is ultimately subject to external influence, the influence of a material technique, or, in short, a technology.

“In recent years our appreciation of the post-Kantian legacy has continued to evolve, and the standard account of thinkers like Fichte and Schelling has been found wanting. Scribner’s text is a very important addition to the Fichte renaissance and a fine work of thinking in its own right.”—Jason M. Wirth, Seattle University

“Scribner breaks new ground in German idealism. He argues that Fichte was led, in attempting a posttranscendental, empirical proof of idealism, toward hypnosis, as discussed in his nearly unknown ‘Diary of Animal Magnetism.'”—Tom Rockmore, Duquesne University

“Matters of Spirit proposes a radically new and potentially revolutionary interpretation, not just of Fichte’s philosophical project but of German idealism as a whole, and makes a strong case for reexamining prevailing views of the same. Many will be surprised and taken aback by the material unearthed and investigated by Scribner, but those interested in post-Kantian philosophy owe it to themselves to become acquainted with this largely forgotten and neglected side of the history of German idealism and the efforts of some of its leading proponents to find ‘empirical’ evidence for spirit. Scott Scribner is unquestionably one of the most original authors writing today, in any language, about Fichte and early German idealism.”—Daniel Breazeale, University of Kentucky

“Scribner presents a compelling interpretation of Fichte’s philosophical development, one that is sensitive both to internal tensions in Fichte’s philosophy and to the historical emergence of materialism. Because of this, Matters of Spirit is sure to become standard reading among scholars of German idealism.”—Matthew C. Altman, Journal of the History of Philosophy

“Scribner's accomplishment in this book is important and original. He has an impressive knowledge of the entirety of Fichte's philosophy, and of the relevance of Fichte's thought to later developments in nineteenth- and twentieth-century continental philosophy. He has made a complex, compelling, and challenging case for reading Fichte's thought in general, and in particular Fichte's thought about the centrality of the imagination, in light of later philosophical worries about the technologization of the imagination. . . . there can be little doubt that Scribner has provided us with an illuminating and original account that does justice to the broad outlines of Fichte's philosophy, and at the same time demonstrates Fichte's lasting relevance for us today.”—Michael Baur, University of Notre Dame College of Arts and Letters

F. Scott Scribner is Associate Professor of Philosophy, Hillyer College, at the University of Hartford.

1. An Introduction to the Crisis of Spirit: Technology and the Fichtean Imagination

2. Technology and Truth: Representation and the Problem of the Third Term

3. Spirit and the Technology of the Letter

4. The Spatial Imagination: Affect, Image, and the Critique of Representational Consciousness

5. Subtle Matter and the Ground of Intersubjectivity

6. The Aesthetic of Influence

7. The First Displacement: From Subjectivity to Being

8. The Second Displacement: From a Metaphysical to a Technological Imagination

The monster in Mary Shelley’s Frankenstein is monstrous because it is an act of blasphemy. By attempting to generate life by means of profane technological innovation, by attempting to generate spirit through profane matter, Frankenstein taints and perverts the sacred. Technology’s attempt to reach the metaphysical level of the god-like is surely hubris. According to Walter Benjamin, Baudelaire, like many others, found the precursor to photography, daguerrotypy, to be “profoundly unnerving and terrifying” for much the same reason. While we all may be playfully amused by stories of so-called primitives worrying that picture-taking would steal their souls, Baudelaire should make us think twice about the sense in which this is true. Benjamin’s analysis of the aura of the work of art suggests that art is a living product that arises out of a dense, collective social web and that its meaning and function are bound to that context. Conversely, what Baudelaire found so frightening was that the communal context that was the very producer of meaning—as a kind of collective imagination, or what we might call spirit—was cut off from its artistic product. The technology of reproductive media, whether as daguerrotypy or photography, would usurp this role as producer. Andreas Huyssen invokes the rather apt term “technological imagination” as a way to grasp the manner in which the technology of reproductive media has both insinuated itself into and, in part, usurped the role of the imagination. He writes, “The invasion of the very fabric of the art object by technology and what one may loosely call the technological imagination can best be grasped in artistic practices such as collage, assemblage, montage and photomontage; it finds its ultimate fulfillment in photography and film, art forms which cannot only be reproduced, but are in fact designed for mechanical reproducibility.” Huyssen’s point, like that of Baudelaire, Benjamin, and others, is that technology’s insertion into the material practice of art is one in which the spiritual vocation of the human creative capacity of the imagination becomes appropriated and shaped—at least to some extent—by material technological practices. To return to Frankenstein and his monster, we might say that Shelley, like Benjamin and Baudlaire, feared that technology’s appropriation of the spiritual vocation of the creative imagination would indeed produce the monstrous: art as the living dead. And while photography has not stolen our souls in any direct sense, the mediation of nearly every aspect of our lives from industrial mass production to the impact of the technology of reproductive media on language itself was a concern not only for Benjamin but also for other inheritors of the German idealist tradition, like Nietzsche and Heidegger.

Nietzsche’s self-described role as a cultural physician makes clear the intimacy between theory and physiology. And while his own embodied need for such doctoring is well known in view of his own illnesses and physiological deficiencies—like impending blindness—what is less well known is the way in which Nietzsche courted technology both as a support and supplement for theory (for a hemorrhaging metaphysics) and as a buttress against his own debilitating physiological conditions. If, as Havelock Ellis argues, philosophy itself began with Plato’s embrace of the technology of writing, Nietzsche’s work in overturning Platonism was in part connected to his own technologically dependent style that would further divorce the spirit from the letter, the Platonic ideas from the act of production, and ultimately metaphysics from technology. The technology of the typewriter made philosophy itself possible for Nietzsche by allowing him to continue to work. He writes, in reference to his Malling-Hansen typewriter: “Finally, when my eyes prevent me from learning anything—and I have almost reached that point! I will still be able to craft verse.” Yes, thanks to the typewriter. Yet this technology did not merely allow Nietzsche to continue working, it shaped his very philosophy by helping produce his “telegram style.” As he himself acknowledges, as a kind of confession, “Our writing tools are also working on our thoughts.” If Nietzsche seems to embrace a philosophy in which the disabled spirit of metaphysics requires technological support, Heidegger’s wariness of technology hints of nostalgia. He famously writes: “It was not German Idealism that collapsed; rather, the age was no longer strong enough to stand up to the greatness, breadth and originality of that spiritual world.” One problem with nostalgia, of course is that it tends to yearn for a world that never was. As we will see, German idealism did not simply collapse: the relation between its metaphysical discourse of spirit and technology is far more complex than the language of mere collapse would indicate. And a detailed analysis of Fichte work makes this unquestionably clear.

Around five in the evening, on September 14, 1813, in a salon at number 36 Franz Strasse in Berlin, Fichte witnessed firsthand a demonstration of the phenomenon of magnetic psychology or mesmerism. Magnetic psychology was a material account of spirit that theorized that the whole world was imbued with a quasi-material invisible fluid that could be redirected to cure the sick and reestablish associations of collective social harmony. To the extent that many, like Fichte, defined spirit in terms of the imagination, its material technique was understood as a technology of the imagination. It took numerous forms, from a kind of learned material technique, much like contemporary hypnotism, to actual technological inventions, like the baquet, a large wooden tub with ropes, rods, and water, meant to link—materially—multiple individuals both to each other and back to the harmony of this quasi-material universal fluid.

Fichte’s account of this event in his “Diary of Animal Magnetism” (“Tagebuch über den animalischen Magnetismus”) could easily be construed as an insignificant biographical detail if he himself had not seen magnetic psychology as key to warding off the rising tides of materialism, to preserving the dignity of spirit, and to preventing the total collapse of German idealism. The fact that Fichte would ultimately recognize that magnetic psychology could save neither his project of the Wissenschaftslehre nor German idealism’s broader claims of spirit is far less relevant and interesting than his prescient attempt to ameliorate the infirmities of the idealist claims of spirit by technological means. And his failure is our failure to the extent—as Heidegger, Benjamin, and Nietzsche make clear—that it is a task with which we are still engaged today.