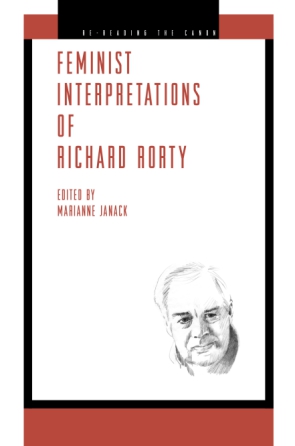 Feminist Interpretations of Richard Rorty presents classic and new essays on Rorty’s engagement with feminist philosophy, including essays about the relevance for feminism of pragmatism, philosophy, rhetoric, realism, and liberalism. The chapters in this volume not only take up Rorty’s conversation with feminism but also distill the debates that were the central concern of feminist theory in the late twentieth century and that continue to demand our responses, perhaps in slightly different forms, in the beginning of the twenty-first.

Marianne Janack is the Sidney Wertimer Associate Professor of Philosophy at Hamilton College.

2. From Irony to Prophecy to Politics: A Reply to Richard RortyNancy Fraser

3. Feminism and Pragmatism: A Reply to Richard Rorty

4. Hope, Truth, and Rhetoric: Prophecy and Pragmatism in Service of Feminism’s Cause

7. Rorty’s Antirepresentationalism in the Context of Sexual Violence

9. Richard Rorty, Feminism, and the Annoyances of Pragmatism

10. Naturalism and Normativity: Rorty and Barad

This series, Re-Reading the Canon, is designed to foster this process of reevaluation. Each volume will offer feminist analyses of the theories of a selected philosopher. Since feminist philosophy is not monolithic in method or content, the essays are also selected to illustrate the variety of perspectives within feminist criticism and highlight some of the controversies within feminist scholarship.

In this series, feminist lenses focus on the canonical texts of Western philosophy, both those authors who have been part of the traditional canon, and those philosophers whose writings have more recently gained attention within the philosophical community. A glance at the list of volumes in the series reveals an immediate gender bias of the canon: Arendt, Aristotle, Beauvoir, Derrida, Descartes, Foucault, Hegel, Hume, Kant, Locke, Marx, Mill, Nietzsche, Plato, Rousseau, Wittgenstein, Wollstonecraft. There are all too few women included, and those few who do appear have been added only recently. In creating this series, it is not my intention to rectify the current canon of philosophical thought. What is and is not included within the canon during a particular historical period is a result of many factors. Although no canonization of texts will include all philosophers, no canonization of texts that excludes all but a few women can offer an accurate representation of the history of the discipline, as women have been philosophers since the ancient period.