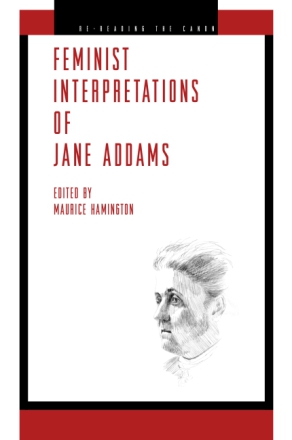 Although Jane Addams’s Twenty Years at Hull-House is considered an American classic, her dozen books and hundreds of published articles have sometimes been thought of as quaint examples of an overly optimistic era. Beginning in the 1990s, feminist scholars rediscovered the vitality of Addams’s social philosophy and challenged the marginalization of her ideas. Today, following a war-laden twentieth century and the failure of militarism and “get tough” approaches to solve domestic and global problems, Addams’s social theorizing, which emphasizes cosmopolitan experiences and sympathetic connections, provides a provocative alternative to Western notions of individualism, transactional relations, and spectator epistemology. Feminist Interpretations of Jane Addams brings together many of the leading Addams scholars in North America to consider Addams’s ongoing relevance to feminist thought.

“Maurice Hamington has brought together an exciting, readable, and intellectually challenging group of articles on Jane Addams. The holistic approach of several essays highlights Addams’s own views, which linked people’s well-being, human rights, women’s equality, democracy, and world peace. The collection will delight Addams’s admirers and enlighten her detractors.”—Harriet Alonso, City College of New York and the CUNY Graduate Center

“Feminist Interpretations of Jane Addams forms a valuable resource for scholars interested in pragmatism and feminism but crucially also constitutes an instance of canonical re-reading, which lovers of philosophy more generally benefit from.”—Clara Fischer, The Pluralist

Maurice Hamington is Associate Professor of Women's Studies and Philosophy at Metropolitan State College of Denver.

2. Cultural Contradictions: Jane Addams’s Struggles with the Life of Art and the Art of Life

7. Love on Halsted Street: A Contemplation on Jane Addams

8. The Theology of Jane Addams: Religion “Seeking Its Own Adjustment”

Although women are omitted from the canons of philosophy, these texts inscribe the nature of woman. Sometimes the philosopher speaks directly about woman, delineating her proper role, her abilities and inabilities, her desires. Other times the message is indirect—a passing remark hinting at women’s emotionality, irrationality, unreliability.

This series, Re-Reading the Canon, is designed to foster this process of reevaluation. Each volume will offer feminist analyses of the theories of a selected philosopher. Since feminist philosophy is not monolithic in method or content, the essays are also selected to illustrate the variety of perspectives within feminist criticism and highlight some of the controversies within feminist scholarship.

In this series, feminist lenses focus on the canonical texts of Western philosophy, both those authors who have been part of the traditional canon, and those philosophers whose writings have more recently gained attention within the philosophical community. A glance at the list of volumes in the series reveals an immediate gender bias of the canon: Arendt, Aristotle, Beauvoir, Derrida, Descartes, Foucault, Hegel, Hume, Kant, Locke, Marx, Mill, Nietzsche, Plato, Rousseau, Wittgenstein, Wollstonecraft. There are all too few women included, and those few who do appear have been added only recently. In creating this series, it is not my intention to rectify the current canon of philosophical thought. What is and is not included within the canon during a particular historical period is a result of many factors. Although no canonization of texts will include all philosophers, no canonization of texts that excludes all but a few women can offer an accurate representation of the history of the discipline, as women have been philosophers since the ancient period.