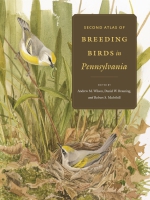 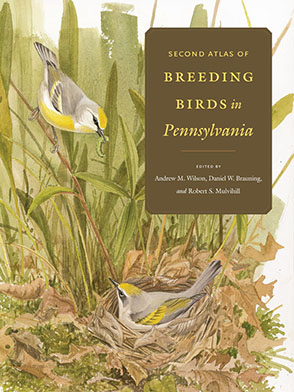 “All around us, the world is changing. Avian communities are in flux, new bird-monitoring technologies are emerging, and our very understanding of nature is evolving. Enter the Second Atlas of Breeding Birds in Pennsylvania. Employing state-of-the-art methods and technologies, this important book brilliantly and compellingly depicts the astonishing pace of change in the Keystone State's dynamic breeding bird fauna.”—Ted Floyd, editor of Birding

Twenty years after the first Atlas of Breeding Birds in Pennsylvania was published, the Second Atlas of Breeding Birds in Pennsylvania brings our knowledge of the state’s bird populations up to date, documenting current distribution and changes in status for nearly two hundred bird species. More than two thousand dedicated birdwatchers completed surveys of birds across the state from 2004 to 2009. The data amassed reveal the distribution of each species and show changes in distribution since the publication of the first Atlas. Additionally, a highly trained survey crew carried out bird counts at more than 34,000 locations statewide. These counts tabulated not just species but individual birds as well, in a manner that—for the very first time—enabled precise estimates of the actual statewide populations for more than half of the 190 breeding species detected. In all, more than 1.5 million sightings were compiled for the second Atlas, providing an unprecedented snapshot of the bird life of Pennsylvania—and perhaps of any comparably sized region in the world.

The introductory chapters to the second Atlas describe and discuss recent changes in climate and bird habitats within Pennsylvania. The data gathered and summarized for this volume were used by the more than forty contributing authors to write comprehensive and authoritative accounts of each species. These accounts are illustrated by stunning photographs, usually taken somewhere within the state. Up to three maps per species show in fine detail their current distribution based on the second Atlas, changes in distribution since the first Atlas, and, for more than one hundred species, their abundance in Pennsylvania.

“All around us, the world is changing. Avian communities are in flux, new bird-monitoring technologies are emerging, and our very understanding of nature is evolving. Enter the Second Atlas of Breeding Birds in Pennsylvania. Employing state-of-the-art methods and technologies, this important book brilliantly and compellingly depicts the astonishing pace of change in the Keystone State's dynamic breeding bird fauna.”—Ted Floyd, editor of Birding

“A must-have for those with an interest in the birds of Pennsylvania.”The Birdbooker Report

“[A] definitive reference and rich source of information for anybody interested in the nesting birds of Pennsylvania.”Pennsylvania Birds

“An innovative feature of this work is an assessment of population size, not just distribution, of many of the species. . . . The second Atlas promises to be a vital tool for bird conservationists in Pennsylvania for many years to come.”—Mary Jo Casalena, Game News

“Many additional features, results, and insightful analysis are provided within the 616 pages of this full-color book. . . . This book brings our knowledge of the state’s breeding bird populations up to date.”—Mary Jo Casalena, Game News

“The book’s editors—Andrew M. Wilson, Daniel W. Brauning, and Robert S. Mulvihill—have taken full advantage of technologies and analytical methods that have emerged since publication of the first Atlas, making this second a sharply attractive, revealing, and masterfully prepared book. . . . It is hard to imagine that any birder would not want a copy of the Second Atlas, whether in Pennsylvania or anywhere in the region, a region that stretches as far north as Quebec and as far west as Ontario. . . . An exceptional summary of a large amount of data, presented in a sharp and impressive tome, this work sets a new standard for atlases to come. It may take up a lot of space on your bookshelf, but as an informative and inspiring reference, the Second Atlas of Breeding Birds in Pennsylvania is a worthy tenant.”—Troy Corman, Birding Book Reviews

“The Second Atlas provides a great template for future atlas projects. Using available technologies, building partnerships for needed skill sets, and eloquently combining the knowledge, skills, and tools into a comprehensive coverage of Pennsylvania bird distributional data, nesting phenology, relative abundances by habitat types and detailed densities for singing males statewide must be most gratifying to the editors and the 2,000 or more participants.
“The Second Atlas is a valuable tool for Pennsylvania bird study for professional ornithologists, seasoned birders, and conservation-minded nature enthusiasts. Anyone planning to design a bird atlas project for their state should study this masterful and successful example. Any birder visiting Pennsylvania should be sure to have a copy of this book at home or in the car. This is a nice addition to any bird library because of the breadth of natural history information included.”—Brad Jacobs, Wilson Journal of Ornithology

Daniel W. Brauning is an ornithologist with the Pennsylvania Game Commission.

Robert S. Mulvihill is Ornithologist at the National Aviary.

Chapter 2: The Geography of Pennsylvania

Appendix B. Common and Scientific Names of Plants and Animals