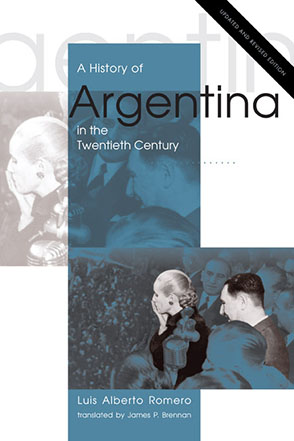 James P. Brennan is Professor of History at the University of California, Riverside. He is the coauthor, with Marcelo Rougier, of The Politics of National Capitalism: Peronism and the Argentine Bourgeoisie, 1946–1976 (Penn State, 2009).

Preface to the First Spanish-Language Edition

Preface to the First English-Language Edition

I believe that, once published, a book should be a closed case for its author. It has a certain life span. It is read, and ages, hopefully with dignity. Yet there are occasions—happy ones to be sure—in which the author must remain tied to a book and assume the risk of transforming it into a sort of serial publication. In the case of this text, my incentive to update it is its continued utilization in introductory university courses, where, I am convinced, history must always have as its final destination the immediate present.

This book was first published in Spanish in 1994. Although it only traced Argentine history to 1989, the year in which Raúl Alfonsín’s government ended and Carlos Menem assumed power, it did contain a preliminary balance of the great transformation of the 1990s. In the second Spanish edition, published in 2000, I added a chapter on the Menem years, without changing the rest of the text. This edition was then translated into English (2002) and Portuguese, increasing the incentives to revise it and bring it up to date. For the current updated and revised English-language edition, I have added two chapters: chapter 10 focuses on the crisis of 2002 and the years immediately preceding and following it, and chapter 11 covers the peak years of Néstor Kirchner to his death in 2010. I have also added material to chapter 9, written a new epilogue, and updated the bibliography.

In revising this book, I am able to put into perspective, and with some critical distance, my own text. As can be seen in the preface to the 1994 Spanish edition, my interpretations were strongly colored by the events of 1983 and the democratic experience that began then. That edition revolved around the question of democracy and its tribulations. At that time, in 1983, I believed that the country had found the appropriate political course: institutional democracy, the rule of law, pluralism, and citizenship. In 2000 it was already evident how much the country had strayed from that path, but I trusted that it could return to it. Today, however, I believe that was an illusion, that those years were a kind of happy parenthesis, and that the old politics of Argentina have been reborn, now under very different social conditions. From the building of democracy in that period, only the right to vote remains fully in force. The current impoverished society is not one propitious for creating citizens. The democratic discourse is today only one among many, and the dominant discourses of the moment are almost its antithesis. Even the principle of human rights—a building block in that experiment with democracy—has taken on an entirely new meaning.

From my current perspective, a great transformation began in the mid-1970s in Argentina, and the problems of democracy are inadequate to explain it. I believe that at the heart of this crisis, one question that we still live with today is that of the state. Prior to the 1970s, Argentina had a powerful state, though one colonized by the various interests that exploited it. Since then, successive governments—save that of Alfonsín, whose behavior was more neutral—have devoted themselves to dismantling the state, rendering its bureaucracies and regulatory powers useless and leaving it defenseless in the hands of the government in power. In that respect, each administration has left its own stamp on Argentina, though I have tried to show striking continuities between the policies of Videla and Martínez de Hoz and those of Menem and Cavallo.

I also see continuity—an even deeper one—between the Menem years and the Kirchner years. Both presidents found a way to handle a weak state. And both discovered the formula for extracting from an impoverished society the votes necessary to legitimize their power. In this sense, I believe that one can speak of a “second Peronism,” comparable in its duration and consistency to the Peronism of 1945–55. This second Peronism has been constructed since 1983, achieved power in 1989, and survives to this day.

I want to mention a minor but completely deliberate change in this new edition. In the original version of the book, I began chapter 7, devoted to the last military dictatorship, with the subhead “The Genocide.” My use of such a term responded to the perception of the country’s problems that I had in 1994. Later I learned that such a description was inappropriate—there was no racial or ethnic dimension to the violence of those years—and that, moreover, it obfuscated the political nature of the repression. For that reason I have changed the subhead to “The Terrorist State.”

In the first Spanish edition of this book, I thanked Juan Carlos Korol and Ricardo Sidicaro. In the second Spanish edition, I added Aníbal Viguera, who helped guide me through the then-tangled years of the 1990s. In this edition, I extend my thanks to two readers who were as meticulous as they were rigorous: Mario Gruskoin and Gabriel Palumbo. I also thank my daughter Ana, now herself a historian, who for a number of years pointed out insights as well as imperfections in the book and, perhaps without intending to, encouraged me to keep this text tied to the present.

Journalism and Power in the Making of Peronist Argentina, 1930–1955

The Politics of National Capitalism