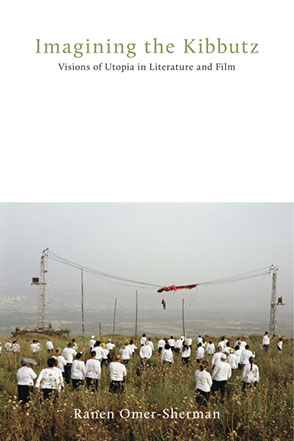 “Thanks to the extensive outlook and the copious collection of texts, Imagining the Kibbutz is a valuable resource and a welcome contribution to the field of kibbutz studies.”—Lior Libman, Israel Studies Review

In Imagining the Kibbutz, Ranen Omer-Sherman explores the literary and cinematic representations of the socialist experiment that became history’s most successfully sustained communal enterprise. Inspired in part by the kibbutz movement’s recent commemoration of its centennial, this study responds to a significant gap in scholarship. Numerous sociological and economic studies have appeared, but no book-length study has ever addressed the tremendous range of critically imaginative portrayals of the kibbutz. This diachronic study addresses novels, short fiction, memoirs, and cinematic portrayals of the kibbutz by both kibbutz “insiders” (including those born and raised there, as well as those who joined the kibbutz as immigrants or migrants from the city) and “outsiders.” For these artists, the kibbutz is a crucial microcosm for understanding Israeli values and identity. The central drama explored in their works is the monumental tension between the individual and the collective, between individual aspiration and ideological rigor, between self-sacrifice and self-fulfillment. Portraying kibbutz life honestly demands retaining at least two oppositional things in mind at once—the absolute necessity of euphoric dreaming and the mellowing inevitability of disillusionment. As such, these artists’ imaginative witnessing of the fraught relation between the collective and the citizen-soldier is the story of Israel itself.

“Thanks to the extensive outlook and the copious collection of texts, Imagining the Kibbutz is a valuable resource and a welcome contribution to the field of kibbutz studies.”—Lior Libman, Israel Studies Review

“In a brilliant analysis that is both comprehensive and penetrating, Ranen Omer-Sherman illuminates the vast spectrum of literary and cinematic narratives that emerged from one of the most radical and thrilling social experiments of our time: the Israeli kibbutz. Omer-Sherman writes with authority and passion, in prose that will excite the scholar and layperson alike. Part literary critique, part social history, Omer-Sherman’s book sheds light not only on the narratives of the kibbutz but also on the utopian enterprise itself, from its heady idealism to its bitter contentiousness. I was, quite honestly, unable to put it down. Anyone interested in Israel, literature, film, or the myriad ways in which artistic expression reflects and shapes the birth and growth of a modern nation would do well to read this book.”—Joan Leegant, author of An Hour in Paradise and Wherever You Go

“The kibbutz is an extraordinary human, social, and economic accomplishment, widely recognized as one of the most impressive achievements of Zionism. The impact of the kibbutz has always far exceeded its numerical size, and Imagining the Kibbutz makes us realize that this is also the case with the visions of the kibbutz in Hebrew literature and in films made in or on Israel. Ranen Omer-Sherman very skillfully combines the particularity of the local scene with universal human experience transcending space and time, such as the clash between individual desires and unyielding national imperatives. Combining the critical outlook of the academic outsider with deep, loving insight acquired through his own personal experience, the author portrays the kibbutz as a crucial microcosm for understanding Israeli values and identity. The book proves that the reports of the kibbutz’s death are greatly exaggerated; it is still a vibrant society making an inspiring imprint both on Israeli reality and Hebrew literature and film. Imagining the Kibbutz is a very relevant and up-to-date book, enhancing our understanding of contemporary Israel at large.”—Aviva Halamish, The Open University of Israel

“Imagining the Kibbutz is not only a masterful study of literary representations of the kibbutz, but also a portrait of a country—Israel—through the lens of its most radical experiment. Tracing the evolution of the kibbutz from its utopian beginnings through economic crisis and ideological disillusionment to its current hybrid forms, Ranen Omer-Sherman illuminates the tensions between individualism and collectivism, capitalism and socialism, diaspora and national identity that lie at the heart of Israeli society. A probing analysis of a wide array of imaginative renderings of the kibbutz experience, this important book should be required reading for anyone interested in understanding Israel’s individual diversity and collective soul.”—Margot Singer, author of The Pale of Settlement

“What makes Imagining the Kibbutz particularly compelling is its emphasis on the affective power that the kibbutz exercises upon the individual. Ranen Omer-Sherman guides us through a diverse array of literary and cinematic texts with sensitivity and astuteness, urging us to bear in mind culture’s humanizing function even in its representation of the most intensely politicized situations. A deeply engaged and delightfully engaging writer, Omer-Sherman balances his experiences with the kibbutz with a discerning and rigorous critical eye, confronting its complexities and contradictions in order to suggest that in many ways these reflect paradoxes that continue to inhabit the core of Israeli identity itself.”—Karen Grumberg, University of Texas at Austin

“The kibbutz has always played an outsized role in images of Israel, representing in microcosm the ideals upon which the nation was founded. The kibbutz embodied, in its purest form, the inherent tension between common goals and individual interests. As Ranen Omer-Sherman gracefully demonstrates in this penetrating analysis, the literature growing out of the kibbutz experience is also an outsized component of Israeli culture. From the outset, the kibbutz was ‘always in crisis,’ portrayed sensitively in the many novels, short stories, essays, and films inspired by the tension between ideology and reality. This landmark study also puts the recent ‘normalization’ of the kibbutz into clearer perspective, making it clear that its role in the broader society remains central. Anyone with an interest in Israeli culture and society will find this book indispensable in highlighting a critical dimension of the Israeli experience, past and present.”—Alan Dowty, University of Notre Dame

“From its emergence in pre-war Palestine until its privatization in the mid-1980s, the kibbutz was an iconic symbol of the settlement of Jews in their historic land. The lived experience of that utopian experiment was sometimes too controversial to deal with in nonfiction, but found expression in literature and film. Ranen Omer-Sherman has produced a valuable survey of such representations, which he considers wistfully, yet hopefully, at a time when kibbutzim are succumbing to privatization, even as some cling to their erstwhile promise of communalism.”—Aviva Ben-Ur, University of Massachusetts Amherst

“A volume whose sharp insights and wide-ranging analyses (some of them appearing here for the first time in English) contribute greatly to our understanding of the histories of and shifting perceptions surrounding one of modernity’s most fascinating ideological movements. Informative for the specialist reader as well as accessible for students and a general lay audience, Imagining the Kibbutz promises to shape the ways in which historiographers, ethnographers, literary and cultural critics, and even authors and artists themselves discuss portrayals of the kibbutz phenomenon in the decades to come.”—Nathan P. Devir, Studies in American Jewish Literature

“Just as some new religions changed and structured themselves in innovative routines, while others failed and declined, the kibbutzim have gone through a similar process of triumph, fall, decline, and change. Imagining the Kibbutz offers an excellent opportunity to review these transformations.”—Motti Inbari, Nova Religio

Ranen Omer-Sherman is the Jewish Heritage Fund for Excellence Chair of Judaic Studies at the University of Louisville.

2. “With a Zealot’s Fervor”: Individuals Facing the Fissures of Ideology in Oz, Shaham, and Balaban

3. The Kibbutz and Its Others at Midcentury: Palestinian and Mizrahi Interlopers in Utopia

Afterword: Between Hope and Despair: The Legacy of the Kibbutz Dream in the Twenty-First Century