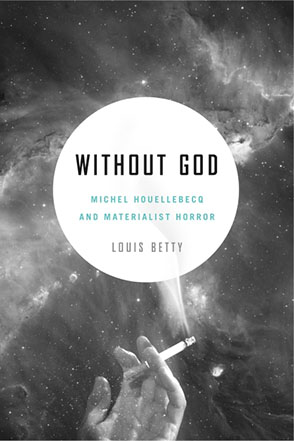 “A superb book that shows how Houellebecq—like Nietzsche before him—is the best diagnostician and therapist for the deepest ills that beset our culture. Another ‘canary in the mineshaft’, he ‘sees the end in everything’, and drags us—kicking and screaming—to face intelligently the social priorities we have been induced to commit to.”—Patrick Madigan, Heythrop Journal

Michel Houellebecq is France’s most famous and controversial living novelist. Since his first novel in 1994, Houellebecq’s work has been called pornographic, racist, sexist, Islamophobic, and vulgar. His caricature appeared on the cover of the French satirical weekly Charlie Hebdo on January 7, 2015, the day that Islamist militants killed twelve people in an attack on their offices and also the day that his most recent novel, Soumission—the story of France in 2022 under a Muslim president—appeared in bookstores. Without God uses religion as a lens to examine how Houellebecq gives voice to the underside of the progressive ethos that has animated French and Western social, political, and religious thought since the 1960s.

Focusing on Houellebecq’s complicated relationship with religion, Louis Betty shows that the novelist, who is at best agnostic, “is a deeply and unavoidably religious writer.” In exploring the religious, theological, and philosophical aspects of Houellebecq’s work, Betty situates the author within the broader context of a French and Anglo-American history of ideas—ideas such as utopian socialism, the sociology of secularization, and quantum physics. Materialism, Betty contends, is the true destroyer of human intimacy and spirituality in Houellebecq’s work; the prevailing worldview it conveys is one of nihilism and hedonism in a postmodern, post-Christian Europe. In Betty’s analysis, “materialist horror” emerges as a philosophical and aesthetic concept that describes and amplifies contemporary moral and social decadence in Houellebecq’s fiction.

“A superb book that shows how Houellebecq—like Nietzsche before him—is the best diagnostician and therapist for the deepest ills that beset our culture. Another ‘canary in the mineshaft’, he ‘sees the end in everything’, and drags us—kicking and screaming—to face intelligently the social priorities we have been induced to commit to.”—Patrick Madigan, Heythrop Journal

“A timely and valuable addition to the growing critical corpus.”—Russell Williams, French Studies

“Betty’s book is an admirable contribution to American literary criticism, as it is the first study of its kind to be produced by an American scholar, but more importantly, it will prove to be an invaluable contribution to the study of Houellebecq writ large. By recognising that Michel Houellebecq is a fundamentally post-secular thinker, Betty offers readers a key to unlocking his fiction, opening doors of understanding that had remained closed until now, and reveals that the author poses a robust challenge to the new materialisms gaining ascendency in the Western academy.”—Andrew Ball, Literature and Theology

“Entirely brilliant from a methodological point of view, Without God sheds a great deal of light on the work of Michel Houellebecq. Given its very broad perspective and the importance of the issues at stake, this book will appeal to a wide range of readers.”—Bruno Viard, Université de Provence

“Michel Houellebecq is the most important novelist writing about religion today, and Louis Betty has written the first book to explore Houellebecq’s views on religion. Betty guides the reader through Houellebecq’s oeuvre, makes French discussions of Houellebecq accessible to English-speaking audiences, and situates Houellebecq’s work in the context of recent scholarly discussions about the secular. This book should be of broad interest to scholars of religion and literature as well as to those interested in contemporary French thought.”—Vincent Lloyd, Syracuse University

Louis Betty is Assistant Professor of French at the University of Wisconsin–Whitewater.

Materialist Horror and the Question of Capitalism

Houellebecq as Character: A Brief Consideration

CHAPTER ONE: MATERIALISM AND SECULARISM

Materialism and Suicide: Logical Consequences of the Death of God

CHAPTER TWO: THE FUTURE OF RELIGION

The Return of Religion

Can a Cloning Cult Be a Religion?

Elohimism, Islam, and the Question of Religious Discipline

The Fresh Ruins of France

CHAPTER FIVE: LIBERALISM IS GOD AND THE WEST IS ITS PROPHET

The Modern Western Woman: A 200-Year Disaster in the Making

As Goes France, So Goes François

Reaction, Romanticism, or Something Else?