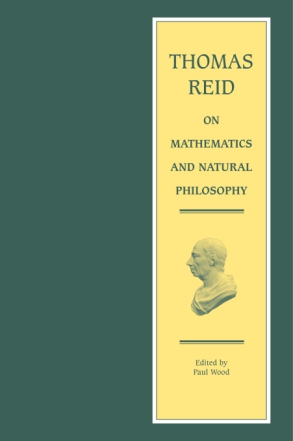 “Thomas Reid on Mathematics and Natural Philosophy is a work of impressive scholarship and an important contribution to the literature on the Scottish Enlightenment.

A philosopher, scholar of the natural world, and gifted mathematician, Thomas Reid holds a distinctive place in the Scottish Enlightenment. This volume reconstructs Reid’s lifelong engagement with the physical sciences and makes clear why these fields were central to his epistemology and moral and social philosophy.

Placing Reid’s “Essay on Quantity” alongside his previously unpublished writings on mathematics and the physical sciences, Paul Wood shows that, in contrast to Francis Hutcheson and David Hume, Reid was a philosopher rooted not only in the science of man but also in the sciences of nature. A self-professed Newtonian, Reid honed his observational and experimental skills while investigating a broad range of theoretical problems in astronomy, mechanics, optics, electricity, and chemistry. He championed the practical application of mathematics, immersed himself in Newton’s mathematical corpus, and addressed foundational questions such as the conceptual basis of Euclidean geometry.

Comprehensive and invaluable, this volume demonstrates that Reid built on his own early precociousness in mathematics to become one of the leading mathematicians and natural philosophers of the Scottish Enlightenment.

“Thomas Reid on Mathematics and Natural Philosophy is a work of impressive scholarship and an important contribution to the literature on the Scottish Enlightenment.
”—Giovanni B. Grandi, Isis-Jrnl. History of Science Society

Thomas Reid (1710–1796) was a Scottish philosopher. The founder of the Scottish School of Common Sense, he played an integral role in the Scottish Enlightenment.

Paul Wood is a Professor of History at the University of Victoria, Canada.