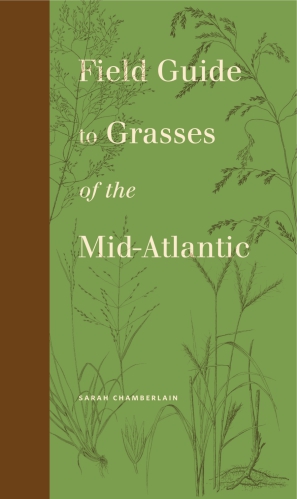 “For researchers and students of the region, this is a must-have text for any collection.”—L. Goode, Choice

Grasses are among the most ubiquitous plants on the planet. They inhabit a wide geographic range and are found in a variety of natural habitats. The small parts of the grass flower and specialized terminology, however, can make identifying grasses a challenging endeavor. Sarah Chamberlain’s Field Guide to Grasses of the Mid-Atlantic makes identification simpler for everyone—regardless of their previous botanical knowledge.

Featuring an easy-to-use dichotomous key, this is a user-friendly guide to more than 300 types of grasses found from the Blue Ridge Mountains and southern plains to the Appalachians and the Allegheny Plateau. Each major entry contains detailed species diagrams as well as common names, habitats, and distribution. The book’s opening sections outline the parts of grass flowers and describe stem, leaf, and sheath characteristics.

With a wealth of illustrations, instructions on how to use the key, and a glossary of terms, Field Guide to Grasses of the Mid-Atlantic is an indispensable reference for naturalists and conservationists, botanists, land management professionals, and students and scholars of mid-Atlantic flora.

“For researchers and students of the region, this is a must-have text for any collection.”—L. Goode, Choice

“Wide species coverage makes this a most useful guide on a topic rarely covered. It is appropriate for amateur plant enthusiasts; professionals will also find it appealing. The numerous excellent illustrations and icons for key couplets are very helpful.”—Donna Ford-Werntz, curator of the West Virginia University Herbarium

Sarah Chamberlain is an Assistant Research Professor at Riparia, a research center in the Department of Geography and curator of the Penn State (PAC) Herbarium.

How to Use This Guide

Parts of the Grass

Roots and Rhizomes (Perennial versus Annual)

Grasses are one of the most ubiquitous plant groups on earth. The grass family (Poaceae) contains more species than almost every other flowering plant family, surpassed only by the orchids, asters, and legumes. Grasses inhabit a wide geographic range, from the tropical to the boreal, and are found in both wet and dry habitats. They dominate the tall grass prairies of the Midwest, the Great Plains, the oak savannas of the west and southwest, and the salt marshes along our coasts. They are an integral component of the flora of many other open habitats as well, including fields, freshwater marshes, and our beloved suburban lawns. Grasses, in the form of grains, are also a staple in the diets of many cultures. Wheat, barley, rye, oats, sorghum, corn, rice, and other cereal grasses are either consumed directly or used as ingredients in many foods. Indeed, it is hard to imagine a modern diet that does not include some kind of grain. Grasses are also used as thatching (Phragmites australis), burned in Native American ceremonies (Anthoxanthum nitens), and woven with other plants to make baskets (Muhlenbergia filipes).

Although grasses are common in many habitats, as a group, they are typically difficult to identify. The minute parts of the grass flower, along with unfamiliar and specialized terminology, make grasses challenging to most who attempt identification. In the mid-Atlantic region, existing grass taxonomies and field manuals are either too vague to assist in identifying all but the most common grasses or too technical for even a seasoned botanist to comprehend. My goal in writing this guide was to provide an easily accessible treatment of grasses geared toward all levels of botanical knowledge and experience. The characters used to identify the different genera and species are ones that, for the most part, are easily observed and understood. I truly believe that if presented in the right context, grasses can be mastered by anyone willing to put forth the effort to learn about this unique and beautiful group of plants.

This field guide encompasses the mid-Atlantic region, including eight states either wholly or in part (map 1). More than three hundred grasses found within the region are included in this guide. They occupy a constellation of habitats and include the very common smooth brome (Bromus inermis) to the uncommon wood millet (Milium effusum). In creating this list, I did not include waifs, garden escapes, or cultivated grasses, unless they have become naturalized. I also did not consider varieties or subspecies, unless I felt there was a compelling reason to do so.

The guide is organized as a dichotomous key (although in some instances there are more than two choices). The first part of the key includes all the grass genera as well as monospecific taxa—that is, genera with only a single species. The second part of the key is for those genera with more than one species. In organizing the key, I tried to position all of the unusual grasses first, so that if users become familiar with these taxa, they will be able to easily maneuver through this section.

In the introductory section, titled “How to Use This Guide,” I also present three unusual grasses: ones with a rame spikelet arrangement, the Phalaridae tribe, and the Paniceae tribe. I urge users to study these grasses. Mastering these taxa will result in a much easier time with identification. I have included a number of pages on the parts of the grass with salient information that will help with identification. I also included a section on dense spikelike panicles. These grasses are often hard to identify because the inflorescence branches are tightly compact and the spikelets are often obscured by bristles, awns, or hairs. Most of the grasses covered in this section of the book are also covered elsewhere in the guide so that the user has more than one opportunity to arrive at the correct identification.

Nomenclature generally (but not always) follows the Flora of North America. Synonyms are given for some taxa and are included in brackets after the accepted name. For habitat descriptions, I relied heavily on Gleason and Cronquist 1991 and Weakley 2105. Keys to the species are based on these sources, as well as the keys of Rhoads and Block 2007, with additional information gleaned from specimens housed at the PAC Herbarium at Penn State University and GrassBase, an online database (Clayton et al. 2006–). Plant distribution maps (by physiographic province) are based on information available from online plant atlases for Delaware, Maryland, New York, Pennsylvania, Virginia, and West Virginia. Information for Ohio and New Jersey are from the United States Department of Agriculture (USDA) PLANTS database, with additional assistance from Kathleen Walz, New Jersey Natural Heritage Program Ecologist, New Jersey Department of Environmental Protection; Linda Kelly, independent contractor; and David Snyder, State Botanist, Natural Heritage Program in New Jersey. Maps for monotypic species in the region are included in the General Key, while those with two or more species are found in the Genera Keys. Users are urged to consult the Utah State University’s Flora of North America website (2008) and GrassBase (Clayton et al. 2006–) for more information on the grasses covered here, including distribution maps, additional descriptors, and line drawings.

Wetland Indicator Status is from the United States Army Corps of Engineers’ (USACE) 2014 National Wetland Plant List, version 3.2 (since updated to 3.3) and is abbreviated as follows:

Facultative upland (FACU) usually occur in nonwetlands, but may occur in wetlands

The status is given for the Atlantic and Gulf Coast Plain and the Eastern Mountains and Piedmont. If both regions have the same status, a single status is given. Unless otherwise noted, illustrations are from the Hunt Botanical Institute’s Hitchcock-Chase Collection of Grass Drawings (2016).