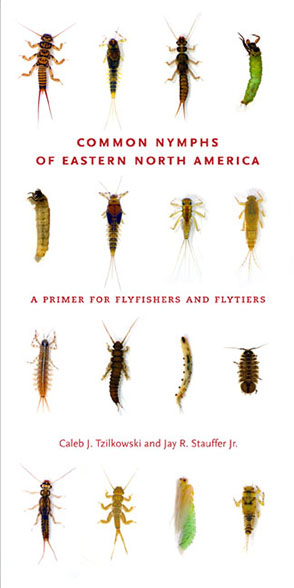 “Two scientists have produced this unique and important must-have book. Tzilkowski holds a Ph.D. in wildlife and fisheries science from Penn State University and is employed by the National Park Service as an aquatic ecologist. His coauthor, Jay Stauffer, Jr., is distinguished professor of ichthyology at Penn State. The two have brilliantly applied their in-depth knowledge of the nymphs of eastern North America to the interests of fly fishers and fly tiers.”Eastern Fly Fishing

Although the concept of “matching the hatch” has been central to flyfishing for 150 years, it has been used almost exclusively for dry flyfishing. With Common Nymphs of Eastern North America: A Primer for Flyfishers and Flytiers, Caleb Tzilkowski and Jay Stauffer Jr. take trout enthusiasts in another hatch-matching direction—to the year-round underwater nymph “hatch,” which, in most cases, constitutes 90 percent of trout diets.

Successful flyfishers have at least rudimentary knowledge of the organisms that artificial flies imitate. The relatively few and very best anglers are expert at identifying and imitating nymph appearances and habits. A major hurdle to becoming expert at nymph matching is overcoming two major limitations that make these animals difficult to locate, capture, and identify: first, nymphs live underwater, sometimes burrowed into the stream bottom, and second, many nymphs are nearly microscopic in size. Common Nymphs addresses those challenges by including habitat and life history information regarding the nymphs, tips for their identification, and representative high-resolution photographs of more than thirty types of aquatic organisms and their imitations.

In the seemingly saturated flyfishing literature, this book offers something truly groundbreaking. With state-of-the-art microscopy and their years of scientific and practical experience, Tzilkowski and Stauffer provide readers an innovative close-up look at identifying and imitating nymphs that have been historically underrepresented in the flyfishing and flytying literature.

“Two scientists have produced this unique and important must-have book. Tzilkowski holds a Ph.D. in wildlife and fisheries science from Penn State University and is employed by the National Park Service as an aquatic ecologist. His coauthor, Jay Stauffer, Jr., is distinguished professor of ichthyology at Penn State. The two have brilliantly applied their in-depth knowledge of the nymphs of eastern North America to the interests of fly fishers and fly tiers.”Eastern Fly Fishing

“The book is a user-friendly and information-dense guide for the nymphing angler. In combining the sciences of stream ecology and invertebrate biology with the angler’s art of flytying, the authors present a practical approach to nymph fishing in a variety of eastern stream and river types. Streamside or at the vise, this book will enrich your angling experience—and you will probably catch more fish.”—Ted Angradi, US EPA Office of Research and Development, Mid-Continent Ecology Division

“In their stream guide Common Nymphs of Eastern North America, Caleb Tzilkowski and Jay Stauffer Jr. take much of the mystery out of nymph fishing. They not only describe the life history of the most common eastern aquatic insects but also provide easy-to-understand guidance on what type of fly to use when and where, as well as basic instructions on how to create effective imitations with the materials already at hand in most flytiers’ arsenals.
“In my observation of wild brown trout in Spruce Creek, contrary to what many anglers believe, I found that trout feed all day long, even though there may be little or no surface action. This book encourages anglers to take advantage of this. It helps them narrow down fly selection when there is no hatch by listing the type and size of food that trout are likely to be eating wherever the angler is fishing at that particular time of year.
“Confidence in the fly that one is using is perhaps the most important aspect of successful fly fishing. Common Nymphs of Eastern North America will undoubtedly help instill such confidence in anglers who are intimidated by bottom fishing.”—Bob Bachman, Commissioner, Pennsylvania Fish and Boat Commission

“Scientific knowledge, fishing experience, and fly-tying expertise meet in a near-perfect blend in this enjoyable, informative, and surprisingly readable volume. Any flyfisher pursuing trout in the eastern part of North America will profit from spending some serious time with this book, as will those in other locales, because much of the information provided here is transferable. Caleb Tzilkowski and Jay Stauffer Jr. are to be congratulated for making such a wealth of entomological knowledge and practical advice so accessible and relevant to ordinary flytiers and flyfishers.”—Rex D. Matthews, Emory University (and dedicated flyfisher)

Caleb J. Tzilkowski holds a PhD from Penn State University in Wildlife and Fisheries Science and is currently an aquatic ecologist with the National Park Service.

Jay R. Stauffer Jr. is Distinguished Professor of Ichthyology in the School of Forest Resources at Penn State University.

Common Stoneflies or the Stones

6. Hellgrammites and Other Arthropods

The appeal of dry fly-fishing is undeniable, but if the only time you can go fishing does not coincide with rising trout, nymph fishing (nymphing) can be very productive, exciting, and rewarding. The purpose of this book is to help flyfishers and flytiers accurately imitate the most common nymphs and aquatic animals on which trout feed in eastern streams. Not only will this book help novice and seasoned anglers catch more trout, but it will likely add to your understanding of and appreciation for the animals that we imitate with fly patterns.

There is certainly nothing wrong with the fact that many flyfishers choose to fish exclusively with dry flies. It is undeniably exciting and gratifying to watch a cagy trout rise from the shadows to either sip a tiny midge pattern or explode into the air after a skittering caddis dry fly. On spring and summer nights on many trout streams, you can see people sitting and waiting for the hatch or for a trout to rise before they make a cast. Again, there is nothing wrong with taking in the splendor of a warm and peaceful spring or summer night and watching the water flow. Different flyfishers have different reasons for fishing only dry flies; nonetheless, some of us enjoy catching fish as frequently as possible and are not patient enough to wait for rising fish. Moreover, most of us must take advantage of the limited time to fish when we can get it, even if it does not coincide with good dry fly-fishing.

Some fly-fishing purists consider dry fly-fishing to be the only worthy use of their fishing time—presumably because nymph or streamer fishing is not enough of a challenge or sport for them. The majority of anglers who are sitting and waiting for the hatch, however, are probably not purists. More likely, they have never had a lesson in matching the “nymph hatch.” As with most things, a little bit of knowledge goes a long way. This book offers that knowledge along with detailed images and information about the nymphs that we most often encounter in eastern trout streams. This knowledge, in combination with a little bit of investigation, will help even beginning anglers choose the most appropriate nymphs to fish on their local streams throughout the year.

Experienced nymph anglers can usually catch at least some fish on any trout stream under even the poorest conditions. They are able to consistently catch fish for three main reasons. First, good nymphers can “read the water” and identify where feeding fish are likely holding. Second, they can naturally drift a fly right along the stream bottom, usually with a “dead drift.” Those two things are probably most important in catching fish with nymphs and require some experience and practice. The third ingredient of nymph fishing is the subject of this book—matching the nymph. You are probably already familiar with two common nymph patterns: the hare’s ear and pheasant tail nymphs. Both patterns do a reasonable job at imitating a variety of mayfly nymphs. Unfortunately, these patterns do not always work well; on some occasions, they do not work at all. We know that an Adams dry fly pattern can perform well for several gray mayfly hatches, but they are obviously not as effective when fish are taking big green drakes at night or tiny morning midges from the water surface. The same idea applies when fish will not move to your size 10 tan caddis nymph but will readily gobble a size 16 green caddis nymph. This is the case because, in large part, trout are selective feeders. Exceptionally big trout become even more selective (particularly brown trout) and will nocturnally hunt larger prey such as other fishes and large crayfish. What this means is that all but the biggest trout will consistently feed on the kinds of prey that are most available to them at any given time. Similar to masses of trout feeding at the surface on abundant and easily available dead or dying adult mayflies, trout will feed on certain nymphs when they are particularly available as prey. This guide will help you identify what kinds of nymphs are likely to be most effective at different times of the year and in different types of streams.

We suggest patterns that do very well at imitating the various nymphs, but remember that creativity and innovation are a large part of the fly-tying appeal. Thanks to microscopy and digital photography, this guide provides flytiers the ability to design their own nymph patterns based on high-resolution images. That, after all, is one of the most rewarding parts of fly-tying—fooling wary trout with something you have made with your own hands and imagination. The other equally important objective of this guide is to give flyfishers and flytiers a better understanding of and appreciation for the animals that we imitate with nymph patterns. For most anglers, there is a lot more to fishing than catching fish. That seems to be particularly true for people who have “caught the bug” of fly-fishing. We hope that this guide makes your fishing trips more rewarding by helping you understand animals that we imitate and their importance to trout streams and adjacent ecosystems.

Successful nymph fishing can be viewed in the same way that journalists approach reporting the news, which is the “five Ws and an H” (who, what, where, when, why, and how). Unfortunately, many flyfishers and flytiers overcomplicate nymph fishing due to a lack of knowledge about the nymphs that we imitate. In this guide, we hope to overcome that by adopting an approach to the five Ws that does not exist elsewhere in the fly-fishing and fly-tying literature. The “who” in our case are the organisms that nymph patterns imitate. As you are probably aware, many fishing and fly-tying books have drawings of nymphs or, more frequently, recipes and pictures of nymph patterns for the reader to imitate. What we have done in this book is provide detailed images of the real nymphs (the who), our suggested patterns to imitate them (the what), and information about their habitat (the where) and their life histories and behavior (the when and why). We have also provided basic tips on the “how” of nymph fishing, but that is not the primary goal of our guide. Many books detail various nymph-fishing techniques, so we will not reinvent the wheel. Instead, we describe a few basic premises. The five Ws in our book will help you catch more trout and, perhaps more important, make nymph fishing a more interesting and rewarding experience.