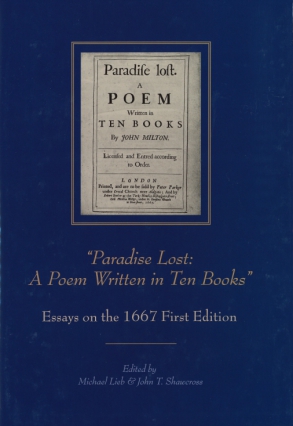 While the scholars writing here do not claim that the first edition of Milton’s epic is to be viewed as supplanting the second and later editions, they do seek to demonstrate the importance of coming to terms with the original 10-book edition both as an epic with its own identity and value and as a work that provides fundamental insight into the nature of the editions that would follow in its wake. As these scholars demonstrate, Paradise Lost is a work that cannot be fully understood without an awareness of the dynamic and ever-changing nature of the forces through which it made its first and subsequent appearances in the world at large.

Michael Lieb is professor of English and Research Professor of Humanities Emeritus at the University of Illinois at Chicago and is coeditor of The Miltonic Samson, which won the 1996 Irene Samuel Award of the Milton Society of America.