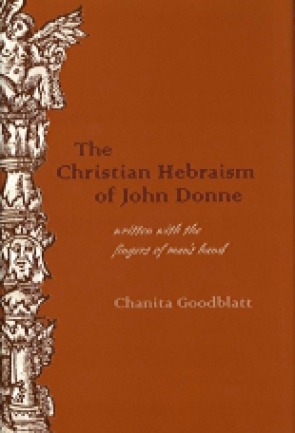 While Donne shows only a basic grasp of the Hebrew language, his sermons reveal the many semantic nuances taken from Latin and vernacular translations of Jewish biblical scholarship. Goodblatt lays out the intellectual context of Donne’s work and ties specific lexical, rhetorical, and thematic strategies to Hebrew traditions. Donne’s work weaves a web of intertextual complexities that highlight the interaction of Christian and Jewish scholarship that influenced the theological and political views of the time period. In addition, Donne’s reinterpretation of the Bible based on Jewish exegesis ultimately adds to an understanding of Christian Hebraism and establishes the Church of England as the inheritor of the Jewish tradition.

This study focuses on Donne’s sermons preached on the Psalms. Organized both generically and thematically, corresponding reproductions of the Hebrew Rabbinic (1525) and the Geneva Bible preface each chapter and allow the reader, regardless of specialization, to follow Goodblatt’s critical analyses.

The Christian Hebraism of John Donne will be of interest not only to Donne scholars, but also to students of Hebrew and Jewish tradition, of scriptural and theological studies, and studies in early modern English history.

Chanita Goodblatt is professor of foreign literatures and linguistics at Ben-Gurion University in Israel. She is a member of the World Union of Jewish Studies, the John Donne Society, and the Association for Jewish Studies.

The End of Equity in the Satyres