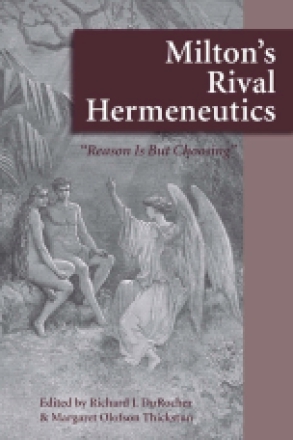 As these eleven essays demonstrate, Milton’s own acts of interpretation compel readers to reflect not only on the rival hermeneutics they find within his works but also on their own hermeneutic principles and choices—an interpretive complexity that is integral to his poetry’s enduring appeal. Thus, each of the contributors takes up the problem of this interpretive dilemma in some way: several explore Milton’s own engagement with the texts of Scripture and the classics; some examine the ways in which Milton represents the process of interpretation in his narrative poems; and still others are intrigued by the challenges that Milton’s works present for the reader’s own interpretive skills.

Milton’s Rival Hermeneutics, in responding directly to the “incertitude critics” of Milton, will be of interest to those on all sides of this debate and will certainly redirect the ongoing conversation.

Richard J. DuRocher was professor of English at St. Olaf College and the recipient of a 2007 NEH fellowship to study Milton s representation of the emotions. He is author of Milton and Ovid and Milton among the Romans in addition to essays on Dante, Spenser, and Bradstreet as well as Milton. DuRocher was a member of the editorial board for Milton Quarterly, a contributor to the Milton Variorum project, and general editor of the Medieval & Renaissance Literary Studies series.

Margaret Olofson Thickstun is the Jane Watson Irwin Professor of English at Hamilton College and the author of Fictions of the Feminine: Puritan Doctrine and the Representation of Women and Milton's Paradise Lost: Moral Education as well as articles on Bunyan, Milton, Swift, and seventeenth century women’s religious arguments.