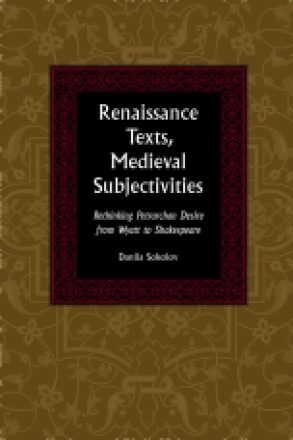 While the lines of division between the Renaissance sonnet and earlier poetry are some of the most entrenched in early modern scholarship, even the origin point of that discourse—responses to Petrarch’s Canzoniere—requires that we recognize that studies of medieval writing provide a necessary grounding. As Sokolov demonstrates through a series of careful readings of works by Wyatt, Surrey, Sidney, Spenser, Daniel, Drayton, and Shakespeare, this poetry is genealogically linked to earlier forms of discourse. In each of the instances discussed, the canonical Renaissance texts display their dependence on medieval technologies of selfhood, including those found in Langland’s Piers Plowman, Chaucer’s Book of the Duchess, Lydgate’s Temple of Glas, and Henryson’s The Testament of Creseyde, among others.

Renaissance Texts, Medieval Subjectivities is not an attempt to identify acts of direct borrowing and imitation; instead, Sokolov focuses on continuities within structures of the poetic imagination: patterns of figuration, forms of textual selfhood, and discursive assemblages. Thus, the book opens up a field of productive engagement between the two periods without the constraints of material history, and also introduces scholars of Renaissance literature to medieval texts that often escape their attention but which have the potential to illuminate important aspects of early modern poetry, culture, and the history of subjectivity. Sokolov draws as well on a great deal of relevant historical evidence, focusing on Protestant attitudes to labor, theories of melancholy, Elizabethan poetics of marriage, legal history, and the impact of syphilis. With this multifaceted, groundbreaking approach to what is first and foremost a study of poetry and forms of the poetic imagination, Sokolov demonstrates that Renaissance selfhood is medieval in its essence, its constitution can be traced historically and textually, and the Renaissance’s most well-known poetry still deserves fresh attention.

Danila Sokolov is a Social Sciences and Humanities Research Council of Canada Banting postdoctoral fellow in the Department of English Language and Literature at Brock University. His work has appeared in the Journal of Medieval and Early Modern Studies, Modern Philology, the Sidney Journal, and SEL: Studies in English Literature, 1500–1900.