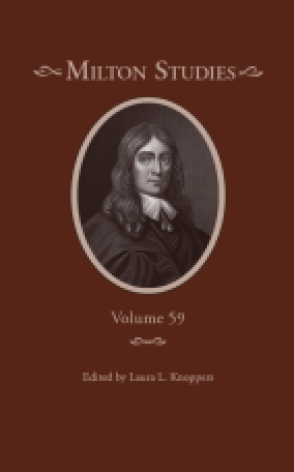 The Ecology of Chaos in Paradise Lost • Sarah Smith

Writing Epic in the Aftermath of Civil War: Paradise Lost, the Aeneid, and the Politics of Contemporary History • David Loewenstein

Laura L. Knoppers is Professor of English at the University of Notre Dame. Widely published on seventeenth-century literature, politics, religion, and visual culture, she is most recently the author of Politicizing Domesticity from Henrietta Maria to Milton’s Eve and editor of The Oxford Handbook of Literature and the English Revolution. Her Oxford scholarly edition of Milton’s Paradise Regained and Samson Agonistes won the 2008 John Shawcross Award from the Milton Society of America. Knoppers is past chair of the Northeast Milton Seminar and past president of the Milton Society of America.

Volume 58, Milton in the Americas