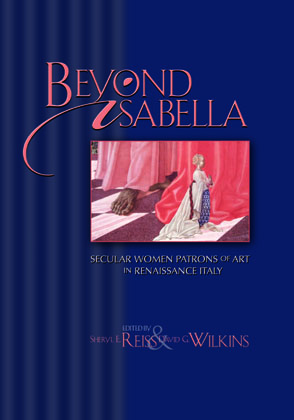 Who were the secular female patrons of art and architecture in Renaissance Italy beyond Isabella d’Este? This volume brings together fourteen essays which examine the important and often unrecognized roles aristocratic and bourgeois women played in the patronage of visual culture during the Italian Renaissance. Themes include the significance of role models for female patrons, the dynamics of conjugal patronage, and the widespread patronage activities of widows.

Collectively, the essays demonstrate how resourceful women expressed themselves through patronage despite the limitations of a highly structured patriarchal society. Thus, Isabella d’Este was by no means unique as a secular female patron, and the studies offered here should encourage scholars to move further ‘beyond Isabella’ in their assessment of women’s patronage of art and architecture in Renaissance Italy.

“The literature assessing the importance of women in visual culture has tended to find the quintessential woman patron in Isabella d’Este. This stimulating and informative collection of essays, each a detailed case study, opens up the subject with a broad chronological and geographical span. Intriguing and relatively unknown women patrons are introduced into the literature.... Well-known women patrons are treated from new points of view, and even Isabella herself gets a new slant, seen here as fueled in her artistic enterprises by rivalry with her husband.... An important contribution to the literature, certain to have heavy use in the classroom.”Choice

Sheryl E. Reiss is Senior Research Associate in the Office of the Vice Provost for Research at Cornell University. She has published articles in the Zeitschrift für Kunstegeschichte, the Jahrbuch der Berliner Museen, the Journal of the Society of Architectural Historians, and the Burlington Magazine.

David G. Wilkins is Professor of the History of Art and Architecture at the University of Pittsburgh. He is the author of Maso di Banco: A Florentine Artist of the Early Trecento; Paintings and Sculpture of the Duquesne Club; and many articles.

Renaissance Husbands and Wives as Patrons of Art: The Camerini of Isabella d’Este and Francesco II Gonzaga.....Molly Bourne

Two Emilian Noblewomen and Patronage Networks in the Cinquecento.....Katherine A. McIver

Vittoria Colonna and the Commission for a Mary Magdalen by Titian.....Marjorie Och

Bronzino in the Service of Eleonora di Toledo and Cosimo I de’ Medici: Conjugal Patronage and the Painter-Courtier.....Bruce L. Edelstein

A Medici Miniature: Juno and a Woman with “Eyes in Her Head Like Two Stars in Their Beauty”......Gabrielle Langdon

A Widow’s Choice: Alessandro Allori’s Christ and the Adulteress in the Church of Santo Spirito at Florence.....Elizabeth Pilliod