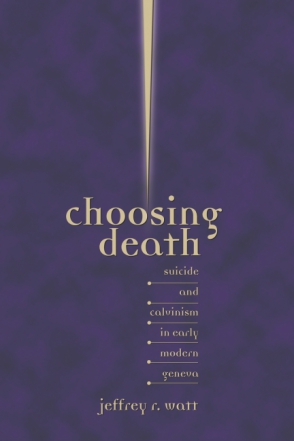 In this case study of the Republic of Geneva, Jeffrey R. Watt convincingly argues the early modern era marked decisive change in the history of suicide. His analysis of criminal proceedings and death records shows that magistrates of the sixteenth and early seventeenth centuries often imposed penalties against the bodies and estates of those who took their lives. According to beliefs shared by theologian John Calvin, magistrates, and common folk, self-murder was caused by demon possession. Similar views and practices were found among both Protestants and Catholics throughout Reformation Europe. By contrast, in the late eighteenth century many philosophies defended the right to take one's life under certain circumstances; Geneva’s magistrates in effect decriminalized suicide; and even commoners blamed suicide on mental illness or personal reversals, not on satanic influences.

Watt uses Geneva's uniquely rich and well-organized sources in this first study to provide reliable evidence on suicide rates for premodern Europe. He places his findings within a wide range of historical and sociological scholarship, and while suicide was rare through the seventeenth century, he shows that Geneva experienced an explosion in self-inflicted deaths after 1750. Quite simply, early modern Geneva witnessed nothing less than the birth of modern suicide both in attitudes toward it—thoroughly secularized, medicalized, and stripped of diabolical undertones—and the frequency of it.

“Extremely dense in detail and information and yet very lucid and readable... this is a very important work, perhaps the most comprehensive, on suicide in the early modern period and should be read both by scholars and upper level students with enthusiasm.”The Catholic Historical Review

“There is much to commend this ambitious study of suicide in early modern Europe, especially Watt’s meticulous combing of the evidence relating to suspicious deaths and his examination of the influence of class and gender on the decision to take one’s own life. It will, no doubt, contribute for some time to the already significant scholarly discussion of suicide among historians and sociologists conducting research into death and dying.”Sixteenth Century Journal

“[Watt’s] well-argued and cogent account is based on comprehensive archival research with strengths far beyond the realm of quantitative analysis. It is an important addition to the corpus of literature on the history of suicide, as well as the social and cultural history of early modern Europe in general. And ironically, Choosing Death is full of vivacious life-and-death dramas, making it lively and entertaining reading.”Moreana

“This intriguing, densely researched, and well-argued monograph does much to forward the discussion of how changing social mores affect community behavior. Watt argues persuasively that physiological or even sociological explanations cannot completely explain the change in behavior. The understanding of suicide and the attitudes of people, churches, and government also played a significant role in how people reacted to suicide and the reasons that some people chose death. This study is a welcome addition to the examination of how the Reformation was received and how popular practices and beliefs evolved and changed as the modern era dawned.”Journal of Church and State

Jeffrey R. Watt is associate professor of history at the University of Mississippi, where he has taught since 1988.

Suicides, Homicides, and Accidents: The Data

The Judicial and Intellectual Dimensions of Suicide

The Social, Economic, and Political Dimensions of Suicide

The Cultural Dimensions of Suicide: Part 1

The Cultural Dimensions of Suicide: Part 2