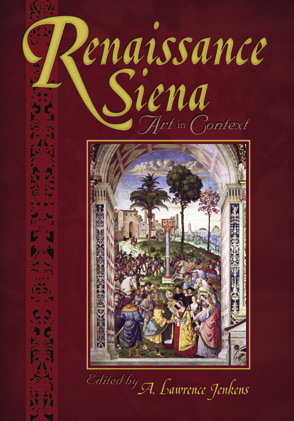 The art of Renaissance Siena is usually viewed in the light of developments and accomplishments achieved elsewhere, but Sienese artists were part of a dynamic dialogue that was shaped by their city’s internal political turmoil, diplomatic relationships with its neighbors, internal social hierarchies, and struggle for self-definition. These essays lead scholars in a new and exciting direction in the study of the art of Renaissance Siena, exploring the cultural dynamics of the city and its art in a specifically Sienese context. This volume shapes a new understanding of Sienese culture in the early modern period and defines the questions scholars will continue to ask for years to come. What emerges is a picture of Renaissance Siena as a city focused on meeting the challenges of the time while formulating changes to shape its future. Central to these changes are the city’s efforts to fashion a civic identity through the visual arts.

“The volume stands as testament to the recent revival of Sienese studies, one with a focus on the fifteenth and sixteenth centuries rather than the much-considered Trecento Golden Age. What is new in this collection is an attempt to consider Sienese art entirely within a local context, free from the traditional negative assessment engendered by comparison with Renaissance Florence, and in many cases within a social-political framework that contrasts with earlier, more conservative methodological approaches… Renaissance Siena represents an important contribution to the field and one that will rightly challenge lingering misconceptions about the city and its art beyond the Black Death.”The Catholic Historical Review

“The essays represent a variety of visual arts, including paintings, architecture, and cassoni panels. The breadth of media, along with the clearly evident depth of the research, advances the very notion of a Renaissance in Siena, with artistic achievements that compare favorably to the cities, such as Florence and Rome, usually glorified for their contributions.”Sixteenth Century Journal

A. Lawrence Jenkens is associate professor of art history at the University of New Orleans. He received his PhD in art history from the Institute of Fine Arts, New York University. Jenkens has also received postdoctoral fellowships from the National Endowment for the Humanities and the Harvard Center for Italian Renaissance Studies, Villa I Tatti, Florence.

Palace Façades in Late Medieval and Renaissance Siena: Continuity and Change in the Aspect of the City.....Matthias Quast

The Rebuilding of Siena’s Church of Santo Spirito in the Late Fifteenth Century.....Mauro Mussolin

Narrative in Context: The Cassoni of Francesco di Giorgio.....Benjamin David

A Fifteenth-Century Sienese Fabula: The Dynastic and Patriotic Significance of the Piccolomini Library.....Stratton D. Green

The Rise of Saint Catherine of Siena as an Intercessor for the Sienesse.....Susan E. Wegner