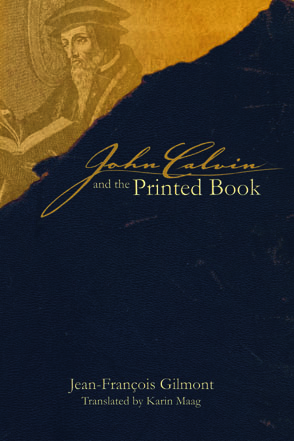 John Calvin made a significant contribution to the world of early modern printing. Jean-François Gilmont, one of the foremost experts in the field, has thoroughly researched and presented all aspects of John Calvin's interaction with books—from the authors he read, to the works he wrote, to his relationships with the printing and publishing world of the sixteenth century. Originally in French, Karin Maag makes Gilmont's research available in this English translation.

“John Calvin and the Printed Book comes from one of the foremost experts in the field of studying John Calvin, and thus deserves a place on any serious college-level library shelf as an essential reference studying John Calvin’s interactions with books and the literary world of the 16th century. Chapters use extensive archival materials and add both biographical and historical elements to the story of John Calvin. Karin Maag translates this classic from the original French.”Midwest Book Review

“It is nicely laid out in sections with subsections, followed by helpful summations of the arguments.... It is of inestimable value to Calvinophiles and to the growing number of scholars who are finding fertile ground in attending to the epoch-making technology of moveable type and the cultural changes flowing from it.”Sixteenth Century Journal

“Book Reviews of the French edition:
This book is a fascinating account based on extensive archival research by an experienced and skilled scholar. It provides a different side of Calvin than the typical theological analysis.”Church History

“This volume is a thorough overview of Calvin as speaker, writer, author, editor, and censor. It discusses the ethereal and the practical aspects of publication and sets Calvin’s writing career firmly within the context of the process of publication.”Sixteenth Century Journal

“No one in the world knows more about the publishing history of Calvin’s works than Jean-François Gilmont.”Proceedings of the Huguenot Society

“Gilmont fleshes out the story of Calvin and the printed book, revealing glimpses into the personality and character of the Reformer, as well as a foray into the world of sixteenth-century printing practices.... This is an exhaustive and well-rounded picture, not just of Calvin the reader-the preacher-the teacher-the writer, but also of Calvin the man, warts and all. Bref (as Gilmont is wont to say), a very fine book.”Bibliothèque d’Humanisme et Renaissance

Karin Maag is director of the Meeter Center for Calvin Studies and associate professor of history at Calvin College. She received her PhD in Reformation history and her MPhil in medieval and Renaissance studies at University of St. Andrews. She has many publications including Seminary or University? The Genevan Academy and Reformed Higher Education, and has edited several contributed volumes.

Preface: Books in the Life of Calvin

The Journey of the Reformer

His Context—People, Ideas, and Institutions

On the Usefulness of the Pen

The Institutes of the Christian Religion

The Sermons in Print

Brevity and Ease of Writing

The Art of Dedications

Calvin’s Knowledge of the Book World

The Censor in Geneva—the Legal Foundations of Genevan Censorship

Censored by the Genevan Council

Censorship Outside Geneva—Calvin as a Censor

Appendix 4: The Structure of the Tractatus omnes (1576)